Poking around Google Earth at a moment of geopolitical drama, I took a look at North Korea. Turns out that military installations are not only indicated by the Google Earth community, they’re described in some detail.

There are areas in several countries that have been left at low resolution at the request of the countries affected for security purposes. Since the Democratic Peoples Republic of Korea [N Korea] is a secretive state that does not have regular contact with the rest of the world, they have not requested any areas to be excluded … The information posted is the work of several that has been combined, which I participated in. I am retired, and spent 22 years in the US Army. During [which] 22 years, I was assigned to Korea for 4 tours…

From a Google Earth Community Member, in an email to Open Source, 7/17/06

In fact, there are several military and intelligence employees, some retired and some active, who turn the defense job into a hobby, helping to point out and explain foreign military curiosities at the very civilian level of Google Earth. One current imagery analyst explained that, though he never divulges classified information, he often ‘identifies naval vessels at’ bases that ordinary Google Earth explorers have stumbled upon. Also, maps from sites such as Globalsecurity.org are overlayed onto the framework of Google Earth. Like an army of ants, the nearly 550,000-strong Google Earth community has voraciously explored the North Korean military installations, including: 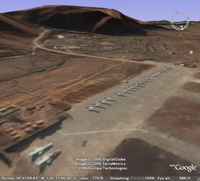 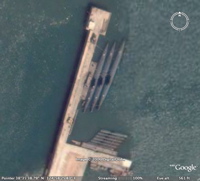 Submarines at Pipa Got naval base, North Korea [Google Earth]

[Google Earth must be downloaded, installed, and open to use these links, which will each fly directly to their location in Google Earth]

Pipa Got naval base

Cho Do naval base

and an apparently functional air base hidden behind a mountain.

Korea: The Politics of the Peninsula

Click to Listen to the Show (24 MB MP3) For Kim Jong-Il, to think that we can just give him carrots and be generous and he will change is a bit...

Click to Listen to the Show (24 MB MP3) Looking back at Iraq [Jdraiders / Flickr] After the Iraq Study Group’s recommendations (and Rumsfeld was ousted and President Bush “agreed that the...