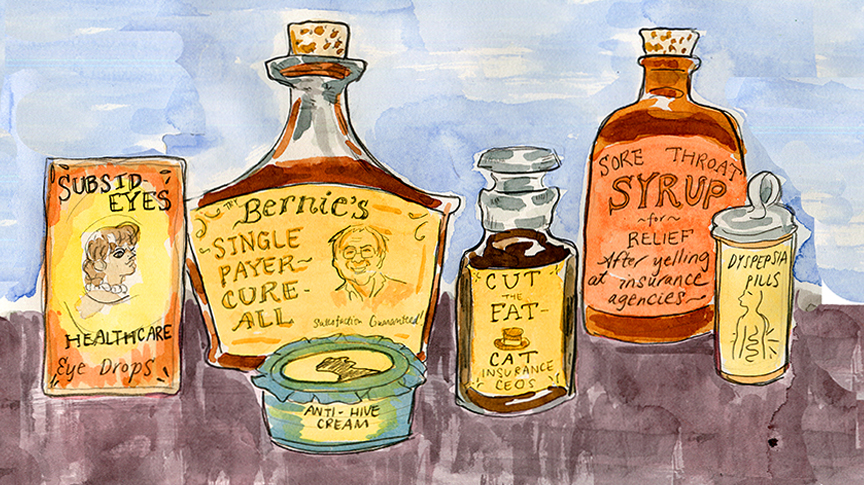 On the Traveling Medicine Show in Washington

With Barack out of the White House, Obamacare now looks something like a 7-year-old orphan: the unwanted child of yesterday’s Washington; a needy patchwork mega law with holes in its coverage.  Strange part is that Obamacare is still on its feet, doing pretty much what it was told to do: extending breaks to some poor people, to 20-somethings, 20 million formerly uninsured.  Stranger still is that the reform legislation that Democrats are having to defend left so much of a broken system in place: hospitals, doctors and drugs at twice the world price, way underperforming Europe, Japan, Singapore, Colombia in healthy results. We know there’s been genius in American medicine, but it seems to have been lost while we were arguing over it and taken over by money and big business.

Elisabeth Rosenthal, author of the recent tell all on our national disease—An American Sickness: How Healthcare Became Big Business and How You Can Take It Back—is our main guide for the hour. She gives us a tour of the rickety foundations of today’s health care system, its responsible architects, and the fixable future. via Adam Gaffney / The Lancet

Adam Gaffney, writer and pulmonary doc, thinks we need to put up a more radicalized fight – a single payer plan—to deal to with the serious inequality in health care today. While we can recognize the gains made by the ACA, we shouldn’t settle for the system we have.

Jonathan Bush, CEO of the cloud-based service company Athenahealth, is our disruptive “data geek” and technoutopian in Watertown, MA. He’s also the nephew of one President Bush, the first cousin of another, and the poster child of the rising force of markets in medicine. He gives us what might be a considered a more optimistic view of the future.

Along the way, we’ll have drop-ins from one of the major economic minds behind both Romneycare and Obamacare (Jonathan Gruber) as well as one of the ACA’s more wonk-ish critics on the left (Matt Bruenig). We’ll also get a short course on the influence of capitalism in medicine—via Prof. Nancy Tomes, recipient of the 2017 Bancroft Prize — as told through a historical tour of your favorite local drugstore: