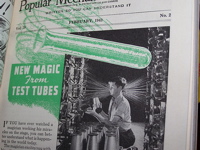 John Warner‘s an interesting and innovative chemist, but of all the things he said in a pre-interview, this was the most striking: there’s not a single regular chemistry Ph.D. program in this country that requires a course in toxicology. Think about that for a minute. You’re taught how to use and create lots of dangerous chemicals, but you don’t have to know how to deal with their toxicity. Or even that they are toxic — and not just in the lab, but everywhere out there in the real world.

Warner and Paul Anastas are the daddies of an adolescent discipline called “green chemistry” — based on designing chemical products and manufacturing processes in ways that drastically reduce (or even eliminate) environmental hazards.

In other words, green chemists design things that are made of benign components and that break down, at the end of useful life, into harmless or reusable elements. And they devise manufacturing processes that use nontoxic chemicals and don’t create polluting wastestreams. They invent industrial processes in which waste from the manufacture of one product becomes the raw material for another product (industrial ecology). They also figure out how to make products in energy-efficient ways — because fossil fuels are a major pollutant in their own right.

There are now, for example, companies making plastics out of corn; and pharmaceutical giants making popular drugs with 90% fewer solvents. What’s driving corporations to do this? Green chemistry’s only about 15 years old, but firms are already savoring the financial benefit (to the tune of millions of dollars) of cheaper inputs and negligible cleanup costs.

So, ROS people: this might be your first chance to ask a green chemist a question — what would you like to know?

Director of the Center for Green Chemistry, University of Massachusetts Lowell

Click to Listen to the Show (24 MB MP3) We’d planned a Duke Ellington at Newport fifty years later show for tonight, but twenty-one suspected would-be terrorists (along with the...

Thanks to Vivid Invention

I’ve owed Daniel Warner of the design firm Vivid Invention a public thank-you for a while now; when we asked for some design help, in about twenty-four hours he got...