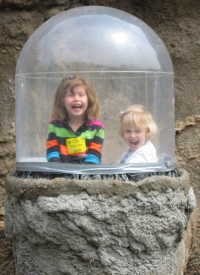 I liked this picture too much not to put it up. Plus it was tagged “groundhog.” (Perhaps they’re in a huge be-your-own-groundhog playland?) [casa-robertson / Flickr]

In the spirit of Groundhog Day — or maybe it’s proof of our faith in the beautiful notion of perennial, incremental betterment — we’ve decided to do this whole thing one more time. Think of it as a repeat of our first annual special.

In case you don’t remember last year’s show, it sounded a bit like the setup of a joke: a screenwriter, a scarily knowledgeable fan, a rabbi, a buddhist, and the author of The Bell Curve walk into a radio show. This year, we promise a fan at least as knowledgeable (who has seen the movie upwards of 400 times), director Harold Ramis, and hopefully a surprise or two. (And by that I mean that we’ll be just as surprised as you.)

In the meantime here’s a homework assignment in that Groundhog Day spirit of self-improvement through repetition: What did we miss the first time around?

“Perhaps they’re in a huge be-your-own-groundhog playland?” I asked in the caption to the picture, and it turns out they were. We got an e-mail from the photographer, David Robinson, last night:

This photo was taken at the Houston Zoo in the winter of 2003. The students were in Mrs. Smith’s pre-kindergarten class. We were on field trip that day. The Children’s Zoo has an area where they have a groundhog colony and the kids can crawl through a little tunnel to stand up in the midst of the groundhogs. They had a blast, as you can see.

Here’s some Emerson fuel for your Groundhog fires:

Finish each day and be done with it. You have done what you could; some blunders and absurdities have crept in; forget them as soon as you can. Tomorrow is a new day; you shall begin it serenely and with too high a spirit to be encumbered with your old nonsense.

Ralph Waldo Emerson (but from where we can’t figure out)

It turns out that one of Greta’s friends taped this quote to her bathroom mirror so she could see it every morning. As a bit of thought experiment, can we suppose that the kindly B&B owner had done this in Phil Connors’s little sink mirror? Does it then become a cruel, 3×5 form of torture or a path to enlightenment? (Or, if you want to be weaselly, both?)

Perhaps it was too good to be true. We got another e-mail about the photo above:

Upon further reflection, I realized that the Groundhogs photo was inappropriately named. The kids were actually in the middle of a prairie dog colony, not a groundhog colony. You’d think I would have realized that the little prairie dogs looked nothing like Phil. I’m glad we connected anyway. Happy GD!

Author, Pursuits of Happiness: the Hollywood Comedy of Remarriage and Cavell on Film, among many others

Director and/or screenwriter of Caddyshack, National Lampoon’s Vacation, Stripes, Ghostbusters, and Analyze This (and on and on)

Tad Friend, Comedy First: How Harold Ramis’s movies have stayed funny for twenty-five years, The New Yorker, April 19, 2004: “The director Jay Roach says that the six films Murray and Ramis made together define a level of achievement he calls ‘extreme comedy.’ ‘You would watch people in the audience just lose their minds,’ he told me.”

Emmanuel Lopez, Tip#24: See ‘Groundhog Day’ over and over and over…, The Adventures of Motivatorman!, January 28, 2007: “Celebrate this coming ‘Groundhog Day’ by watching the movie. And ironically to its story, repeat viewings of this movie can reveal so many of its motivating gifts to you at different times of your life. Let it mirror the situations in your life that you feel caught in repeating over and over again. You will be reminded that no matter how bad things get that everything will truly be okay.”

Michael P. Foley, Phil’s Shadow, Touchstone, December 7, 2003: “The ground of Groundhog Day, in other words, is Catholic. And just as our secular celebration of the day unwittingly echoes a deeper truth about the Light revealed to the gentiles, so too does the movie unwittingly point the way back to that truth.”

“The wretch, concentred all in self,

And, doubly dying, shall go down

To the vile dust, from whence he sprung,

This is the probably the only outline that I’ve ever actually enjoyed creating. I made it for last year’s show and happily rediscovered it this week. It’s a chronological account of...