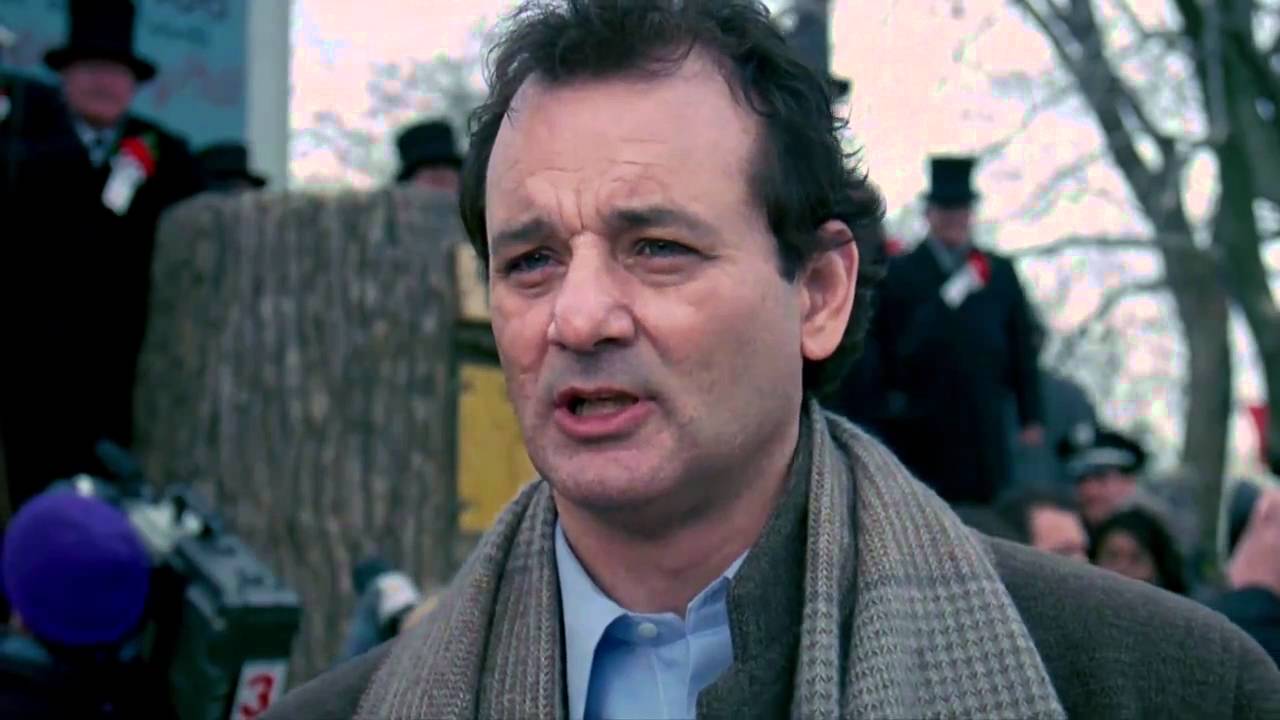 "Watch out for that first step. It's a doozy!"

It could have been just another funny comedy, a Bill Murray vehicle, a good but forgettable flick. But clearly it’s much more. It’s more than a cult film, even: it’s a classic. Why?

In a story meeting a few days ago Mary said that “Groundhog Day” is for a certain generaton — mine, I guess (I’m 30) — what “High Noon” “The Searchers” was for a former one. I’m not exactly sure what this means, but I have a feeling she’s right. And also that it’s more than generational.

Screenwriters crib from it. Film theorists teach it. Orthodox Jews love it. As do Jesuit priests. And Buddhists really love it. Stanley Cavell, the Harvard philosopher who normally writes about Wittgenstein and Emerson (along with film comedies of the 30s and 40s, and a lot more) named it as the contemporary work of art that will be cherished 100 years from now.

But unlike, say, Caddyshack — another Bill Murray movie also directed by Harold Ramis — people don’t memorize lines or standout scenes. Fans may have their favorites of each, but the movie seems to be beloved more in its totality. Which seems good and right in a Buddhist sort of way.

But if Mary is right (and when isn’t she?), and “Groundhog Day” is some new touchstone for a generation or a time, what does that mean? What does Groundhog Day mean to you? Why does it hold up? (Or maybe the first question is: does it hold up, for you?) Why does it get better, this film with so much repetition and such subtle variation? What kind of religious gloss would you give it? Any at all?

Most other countries don’t have groundhogs; none have Groundhog Day. How, then, to present the movie “Groundhog Day”? We dredged up a few examples.

Guest List
Paul Schindler
Groundhog Day fan extraordinaire and keeper of groundhogdaythemovie.com
Danny Rubin
screenwriter of Groundhog Day and professor of film writing.
Angela Zito
professor of anthropology and religious studies at New York University, and co-director of The Center for Religion and Media at NYU.
Niles Goldstein
founding rabbi, The New Shul in New York City and author, Spiritual Manifestos: Visions for Renewed Religious Life in America from Young Spiritual Leaders of Many Faiths, among many other books.

Click to Listen to the Show (24 MB MP3) I liked this picture too much not to put it up. Plus it was tagged “groundhog.” (Perhaps they’re in a huge be-your-own-groundhog...

This is the probably the only outline that I’ve ever actually enjoyed creating. I made it for last year’s show and happily rediscovered it this week. It’s a chronological account of...