Hamas is trapped. They have an agenda, but they never dreamed to be in full power. Now, Fateh pushed them in the corner. Fateh is not going to join them in power. They don’t want to be part of any government ruled by Hamas agenda, and this is their right.

Hamas builds schools, clinics, and shelters. Hamas is intertwined in the people and amongst them. More importantly though, Hamas will not bend to others will; and that image is an opportunity. As only Sharon could have pulled off Gaza only Hamas can accept it.

Karim Elsahy, One Arab World, Hamas Won — Where From Here 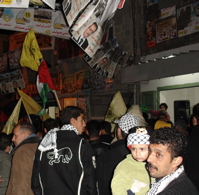 In the Azzah refugee camp after the announcement of the election results [pharoah.berger / Flickr]

So which is it? It’s always difficult for the opposition to accept power; it’s easier to push a hard line than actually carry it out. Now that Hamas is alone on top with its majority — and ultimately in charge of making sure it gets elected again — will it find itself forced to compromise? Blogger Karim Elsahy points out above that, like Nixon to China and Sharon to Gaza, perhaps only Hamas has the moral authority to make concessions; could the election results be, as Elsahy believes, an opportunity?

And what, exactly, does Palestinian democracy look like? This morning we caught Blogger Patrick Belton on tape in Ramallah; he described western political consultants, powerpoint presentations, and explicit instructions that, if Hamas candidates must wear beards, not to dye them red. Is Hamas, like the IRA, starting a twenty-year road to a purely political party? With its odd array of services — schools, clinics and terrorism — is it even anything close to what we understand under the word “party”?

Nothing but questions here. Fill in the blanks below.

Karim Elsahy, One Arab World, Hamas Won — Where From Here