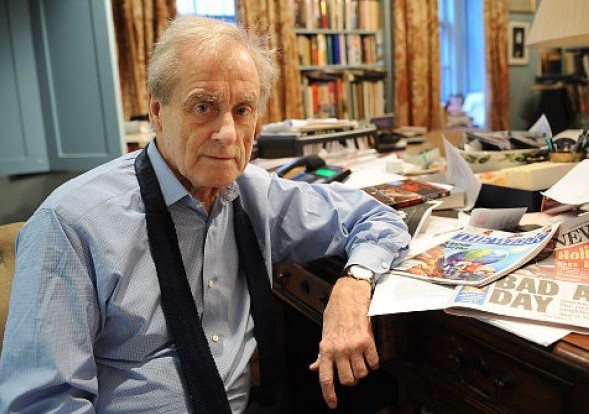 Harold Evans, doubtless the finest English newspaper editor of his time, could make you weep in his memoir of formative days in Manchester and glory years (1965 – 1981) with the Sunday Times of London. Weep, that is, not so much for the anemic papers so close to death today, but weep for those cheeky deadline artists, the newspaper writers and “subs” on the copy desk who are disappearing into memory and mythology, like the American cowboy.

My Paper Chase: True Stories of Vanished Times is the story of Harold Evans’ addiction to printed news, and of the characters whose trade he lifted — newspaper guys (and they were all guys, long before Evans met Tina Brown) with nicknames like Nifty, Bow Tie, “Big Tom” Henry, “Beachcomber” of the Daily Express, and “Mr. Will” on the Northern Echo, Evans’ first paper. “Curiosity is the thing in journalism,” Mr. Will said. “Ask questions, Evans.” And then there are the giant by-lines of the Sunday Times, like Godfrey Hodgson in America, John Barry in Ireland, David Leitch in Vietnam, and the investigator Bruce Page, everywhere. Harold Evans spins my head around just when I’d begun to think we could do without the papers, which we may just have to. But what about those people — those “rag and bone men of the opinion trade,” where Evans located himself; those lightning desk editors on the Manchester Evening News, “hunched men in cardigans reducing cataclysms to column inches,” and all those reporters gifted, as one of them said, with “ratlike cunning, a plausible manner and a little literary ability.”

The thread in our conversation is: how long can free democratic people survive without those faithful wretches?

We are a mixed bunch. One of the great strengths of the Sunday Times, when I edited it, was how variegated the characters were. I mean we had a former antique dealer, who actually led us to the first exposé of the antique dealers’ rings. We had a microbiologist. We had a woman who gutted chickens who later became Anne Robinson … so we had a really variegated staff. That is one thing that I think is missing today. That heterogeneity that we celebrated is slightly disappearing… I think the business of discovering truth is much assisted by different perceptions of renegades. At the same time, I had all these these very clever PhD’s in my office. So, whichever way you spun it, it seems a very bohemian bunch of people, some of them drinking a lot, some of them smoking a lot, some of them not doing either of those things. We had a few aesthetes on my papers, in my time. But out of this multi-faceted approach to our complicated world came something very close to the truth from time to time…

It’s more important to find out than to sound off. And we get a vast amount of sounding-off today, without anybody knowing what the hell they’re talking about. Just think how different our last ten years would have been if we’d done the proper job of reporting on Iraq before we went into it… This era overlapped with the web. And I love the web. The point is that not even the web, not all the famous bloggers really got onto this.

The Future of Newspapers

Click to Listen to the Show (24 MB MP3) Newspapers at a tipping point [Mlehet / Flickr] An online redesign of the New York Times aside, newspapers don’t have too much to...