The Globalization of Hip-Hop

The Globalization of Hip-Hop

Our first hip-hop show will look at the culture/phenominom domestically. This, our second hip-hop show, will answer a challenge posed by listener leonplays on our blog. 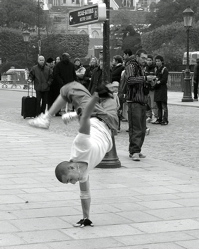 I was interested in the idea of hip-hop music as a kind of cross-cultural glue for the marginalized immigrant experience…Europe, Brazil, Asia…hip hop music has been taken in by everyone, with many different interpretations but a common sense of identity. Can an Arabic 18 yr old in a French ghetto identify more with 2-Pac or Snoop Dogg than French cultural icons? Why do oppressed people all over identify with the story of Black American ideas of struggle and success? What message is mainstream hip-hop music selling to the world? I would love a future show on these kinds of questions. Are you up for it Chris?

Oh, we’re up for it alright. Calling all b-boys and b-girls from Ukraine, Toulouse, and Tokyo…

Former Executive editor of The Source

Thanks to awurrlu for recommending Prof. Durand

Hi all. We’re picking this show back up after letting it simmer for a bit. Some great suggestions on the blog, including from our own SamRMadden. Sam, I will try to let people experience the show for themselves. Also, I’ve given the show a slightly sexier title based on my new understanding/thinking about the subject.

The hip-hop generation seems like a walking contradiction to a lot of people because of its ability to make sense of multiple realities at the same time, as it moves into the nineties and becomes more of a commodity, and no longer a tool for resistance.

What makes hip-hop special is that wherever you are in the world anyone can add their voice to this equation and effectively communicate to this imagined community all over the world what their protest is, what their exploitation is.

The reason we heard so much R&B across the world [during the nineties] was that these artists, whether their words were radical or not, their bodies symbolized an opposition to white supremacy or american imperialism or classism. it was a coded, maybe more passive, way of playing resistance right under the nose of the imperialist powers.

Latin America is a huge, diverse region… there are some places where the slant is more towards entertainment, some where it’s more towards politics… this is the idea of fun even if the beat isnt all super danceable or super pop, the idea that it’s moving you. That line of entertainment as being something that’s danceable versus political is very blurry, you can’t draw it, it’s not so black and white.

Hip-hop has bridged that [large, diverse language] divide [in south africa], it has been existing between different cultures even within our country … When i started listening to hip-hop seventeen years ago (Public Enemy) a lot of people saw me as this foreign kid who can’t relate to local culture. And with this bridging between the older generation and the newer a lot of older people don’t understand hip-hop, [they’d] always think that kids are trying to be american. Within the last couple of years kids have been doing it in their native way, using tribal sounds, making it more African (or South African) so that the older generation could understand there are issues in our society and we are relaying those messages in our own languages and our own dialect.

(The net effect of the song ‘Thank You’) The ultimate question is when are we going to wake up about what is happening in current-day South Africa?

You find a lot a lot of kids sitting in the backyards on their PCs recording their own voices and creating hip-hop music in the community. ‘Mr Nobody’ is a track about all the homeless people and the economic divide which exists in south africa… The city [politics] have changed from being a white and black issue to a rich and poor issue. Just walking at night you see kids sleeping on the corners sniffing glue, with no hope… [Mr. Nobody–the song] is a track that reflects about that, asking when these leaders with shiny coats are going to empower these people at the bottom.

(On hip-hop songs having prophesied the riots and the causes framing them) The French rappers have been saying it over and over, and now here we are with the result of that.

Hip-Hop Citizen of the World

Graffiti from Mikko’s album [mikmikko/Flickr] Few people embody hip-hop as a global phenomenon better than blogger Mikko Kapanen. He was born in Helsinki, Finland, studies in Birmingham, UK, and DJs...