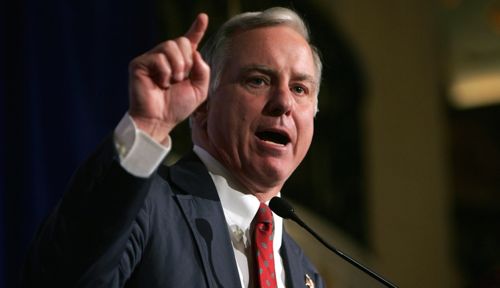 The difference on healthcare between Dr. Heart-throb in the 2004 campaign and the Democrat who swept the board in 2008 turns on strength and clarity of leadership, Dean says, with wondrously open self-regard.

I asked Howard Dean last night: “if you’d been elected President, and Barack Obama were still in the Senate, might you have bent to the lobbies? And might Obama be out hammering you for the ‘public option’ in healthcare?” Dean laughed, but he didn’t seem to doubt the premise — that institutional pressures are in the saddle.

The public option — meaning some extension of the “socialistic” coverage now offered to seniors, veterans and Congresspeople — can’t be compromised, Dean shouted. (He didn’t scream.) It is the compromise.

The fight that President Obama will take to television tonight, is not between progressives and conservatives, Dean argued. The only real fight is between the insurance companies and plain people.

The president will abandon his “consensus” sell and make a partisan fight for the healthcare he wants. That is, Dean said, he will use his majority in both branches, or he will lose it.

“A bill without a public option is not a victory,” Dean declared, “it’s a defeat.”

The sold-out crowd of 600-plus in Harvard Square’s First Church in Cambridge loved it — no surprise — and egged him on.

It took off when the nice lady in the white dress asked Dr. Dean: “When are the Democrats going to grow a pair?”

“Why aren’t you Secretary of HHS?” somebody yelled.

“Because I couldn’t say any of the kinds of things I said tonight if I were,” Dean yelled back.

I post it as the sort of fighting stance that many more Democrats would love to hear from their president. What do you think?

Collapse of the Senate Immigration Bill

Click to Listen to the Show (24 MB MP3) Last week the Senate’s immigration bill — championed by George Bush, John McCain, and Ted Kennedy — collapsed under the pressure of...