I Can Has Talking Animals?

I Can Has Talking Animals? 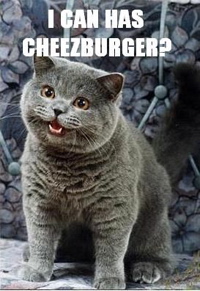 The ur-lolcat. [I Can Has Cheezburger ]

If you only use the internet for boring things like, you know, reading the newspaper and listening to smarty-pants public radio shows (psht), you’ve probably missed one of this year’s most ridiculous, anthropomorphic, internet memes – the lolcats.

The recipe is pretty simple: take a picture of a cat or another animal which may or may not be funny by itself, add a caption, and voila, hilarity ensues. The blog I Can Has Cheezburger? has collected some of the finer specimens.

I used to think these picts were just random. But after talking to one of the guests for tonight’s anthropomorphism show, I realized they were also a little profound. Marc Shell teaches a class at Harvard on talking animals in culture high and low, from Poe’s Raven to Pepe Le Peu. His thesis is that giving animals speech and then making them talk funny is all about distinguishing who is like us and who is not. Not just who is human and who is not, but also, who is a native English speaker and who is, say, a Mexican immigrant. I was shocked to go through the list of classic Warner Brothers cartoon characters and realize that almost every one of them, from Porky Pig and Foghorn Leghorn, to Elmer Fudd and Bugs Bunny, have some kind of outrageous accent or speech impediment. 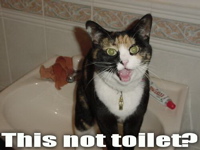 [I Can Has Cheezburger ]

[I Can Has Cheezburger ]

The lolcats are not that far off. Each picture’s caption, which is usually like a little speech bubble, is almost always messed up in some way. Bad spelling, bad grammar, misused words, etc. In other words, the lolcats are funny because they don’t know how to “speak good English.” So to speak. For some reason, it’s a lot funnier to picture a cat saying, “I can has cheezburger?” than it is to picture it saying, “Can I have a cheeseburger?” Eschewing for the moment that these are cats and that they can’t…talk…at all.

Not to mention the fact that this isn’t just about animals talking. The “lol” part of lolcats stands for “laughing out loud,” an acronym that comes from instant messaging. Other computer-esque typos or abbreviations are common in the captions, including 1s instead of exclamation points and thx instead of thanks. So now, it’s not just about animals talking funny; it’s about them typing funny, or even (gasp) sending each other instant messages. Weird, right? 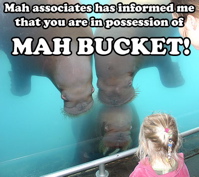 A variation – the “lolrus” bucket saga. [I Can Has Cheezburger ]

Maybe we’re jealous of the animals. We’re a little too smart for our own good and we worry all the time. It’s a longing for innocence, an attempt to be...

I think half of the comments from the Anthropomorphism show’s thread, aside from the story-telling angle, still apply to this discussion. Is there anyway to repost them? Or compile another...