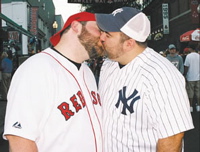 The stars are almost aligned. But before we can live through another Red Sox-Yankees ALCS, both teams have to get to the post-season. And before that happens: a final, cataclysmic end-of-season fight to the finish. (There’s also the matter of one of them getting the wild card, but whatever. That’s another show.)

For now, we’re talking to Red Sox bloggers and to Yankees bloggers, and we want to line them up for a show and have them go at it. Like a cage match, maybe. So what are your questions? A few for starters:

Author, The Answer is Baseball and The Cleveland Indian

[On the phone from New York City]

[On the phone from Boston]

[On the phone from New Jersey]

I think it’s certainly true that, across the board, at selective colleges and universities, faculty do have a lot of power. They may not have formal power, and the particular...