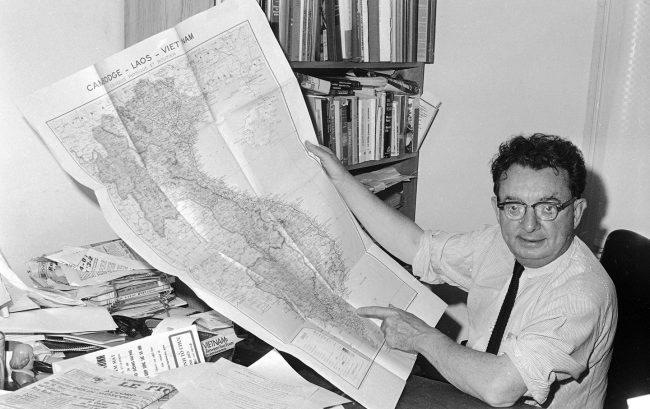 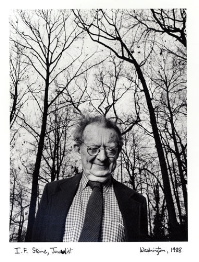 I. F. Stone was the only genius I ever observed in the genius-proof genre of deadline journalism. He was also, as is often celebrated nowadays, a proto-blogger: he wrote with an absolutely one-off independent spirit and lived without a boss or a staff (but for his dreamy, gorgeous, and adoring wife Esther) on the $5-a-year subscriptions to his four-page newsletter, I. F. Stone’s Weekly. He was a model for our time and for the ages, as is more and more universally granted.

But let’s get something straight. He was not one of us. Geniuses and gods are different from you and me. And the regular street-talking little guy we all called “Izzy” had touches of an exalted and prophetic acquaintance with divinity. And he knew it! He said to me more than once that he might have been editor of The New York Times — and knew he’d have been brilliant at it — but really preferred to stand alone, on the outside. He was a pariah by choice. He knew and adored the Hebrew prophets: Isaiah and Jeremiah were his favorite by-lines, and he was not beyond identifying with the range and vehemence of their voices.

Izzy Stone knew very, very confidently what the wider world is just coming to understand: that he was writing for all time. He was a mid-century leftist, yes, in the time of the Cold War, McCarthyism and the Civil Rights Movement, but he was self-consciously a humanist and a dissenter in a much longer tradition going back to Athens as well as the Bible. He was aiming in every Weekly, every book review, every profile, for the high pitch of other artists he admired: Andre Gide, Henry James, Mozart, Freud. And his friend Albert Einstein.

Stone’s short obituary tribute to Einstein in April, 1955, reprinted in The Best of I.F. Stone brings tears to my eyes for the penetrating humanity of Stone’s insight into a hero, but also for that ever-curious way in which everything a man writes reveals himself. Fifty years later, Stone on Einstein reveals much of the inner Izzy, and much of what I feel about him:

Professor Einstein would not have liked a stuffy tribute. My wife and I loved him. He was a charter subscriber to the Weekly, and often strained its primitive bookkeeping facilities by renewing when no renewal was due. We and our three children had the great pleasure on several occasions of having tea with him at his home. It was like going to tea with God, not the terrible old God of the Bible but the little child’s father-in-heaven, very kind, very wise and yet himself very much like a child, too…

If our dim understanding of his work has any validity, we thought of it as a lifelong search for a new and greater unity in physical phenomena, and the re-establishment of the possibility of law in the universe. A world world made up only of statistical probabilities offended his profoundest instincts: he was like Bach or Beethoven, striving for new harmonies, but with the tools of mathematics and physics…

The man who sought a new harmony in the heavens and in the atom also sought for order and justice in the relations of men. As the greatest intellectual in the world of our time, he fought fascism everywhere and feared the signs of it in our country. This was the spirit in which he advised American intellectuals to defy the Congressional inquisition and refuse to submit themselves to ideological interrogation. In that position he was interpreting the First Amendment as Jefferson would have done…

I.F. Stone on Albert Einstein, from The Best of I.F. Stone

Much as he said of Einstein, Stone too reigns in that immortal realm far beyond politics and physics and journalism — the warm human memory of transcendence.

Author, All Governments Lie: The Life and Times of Rebel Journalist I. F. Stone