While putting together our Coming Home: Iraq Veterans show, I recorded a handful of stories. We were hoping to play them during the broadcast but, as is often the case, there wasn’t enough time.

One of the veterans I interviewed was Robert N. Gibeault, Jr. who served in Vietnam for 20 months straight. As soon as he landed on US soil the effects of nonstop combat were immediatly apparent.

Years later Gibeault was diagnosed and treated for post-traumatic stress. But when he saw the Trade Towers collapse on September 11th, 2001, he knew that he would never fully dodge the triggers that set off bouts of anxiety attacks, or nightmares, or sleepless nights.

About an hour before we did this show Robert sent me the following email:

What I neglected to tell you was that a major portion of my post-traumatic stress disorder happened on the day I was wounded, February 5, 1968. I thought that I had accidentally killed some of the troops on the ground that day, so there was no POST in the traumatic stress. I knew the second it happened. It wasn’t until 30 years later, when I communicated with one of the soldiers who was on the ground, that I learned that I hadn’t killed anyone that day.

Here is a picture the ground troops took that day. I’m in that attack helicopter. In the background is an F-4 Phantom and in the foreground you can barely see the outline of a helmet. 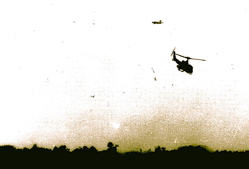 The following is a poem I wrote a few years ago:

For those of us both friend and foe

Who broke our teeth on the stone, Ap Cho

We stormed that ground

In murderous rage, we took the stage!

On that bloody stone,

Who dares describe that crimson tide?

Words fill me with a sickening pallor

A survivor I am

Of that bloody stone,

Curse him who dare replace them!

When heaven bursts wide and out flows the tide

Both friend and foe standing side by side

In unison they hail,

Here comes a Brother who broke his teeth

On that bloody stone,

What the Active-Duty Military Wants

The American military — once a staunch supporter of President Bush and the Iraq war — has grown increasingly pessimistic about chances for victory. For the first time, more troops disapprove...