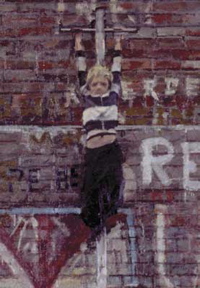 Ken Howard, RA is a British painter whose lush landscapes, nudes and interior scenes have made him successful and well respected in England. (The RA after his name designates him as a Royal Academician, which means he is one of only 80 full members of London’s prestigious Royal Academy of Art.) But looking at the light-filled, romantic paintings he makes today, you’d hardly guess he spent the first half of his career painting scenes of military life.

Howard served as a marine from 1953 to ’55, and kept a meticulous sketchbook filled with drawings of the daily life of soldiers. Based on this work, in 1973 he was appointed as the Official Artist of Britain’s Imperial War Museum. He was the first official British war artist since the end of World War II, but apparently, was not called an “Official War Artist” because officially, the situation in Northern Ireland wasn’t a war.

I lived with the regimen and went on patrol with them. Unlike in a proper war I could go out with them to observation posts and vehicle checks and the like. I was very much hands on, and the regiments liked this because whatever I did was right. No on could say, a soldier wouldn’t have carried his gun like that or wouldn’t have walked then when he should have run, because I was there.

I was very popular with the regiments because of the way I work, being very figurative, expressing the life of the regime rather than making any sort of comment on what they were doing. I was making fairly dispasionate and objective depictions of the life of this order in Norther Ireland.

I didn’t take photos. I just sat down and drew in some very hairy places. If you were drawing all the time, which I was, people could see what you were doing. Whereas if you took a camera, they didn’t know what you were collecting, or why you were taking pictures. So if I sat drawing in the middle of Falls Road, the local Catholics would come up and see what I was doing, and there was nothing questionable about it. They knew I was with the army and where I was staying because the intelligence at that time was pretty good. But I never felt in danger. Whereas if you had a camera it would have been different.

Howard’s most famous painting of the conflict in Northern Ireland is a multi-pannel alter piece called Ulster Crucifixion. Styled after medieval religious pieces, the painting depicts a young Irish boy hanging frm a lamp post in front of a graffiti covered brick wall.

I did a lot of paintings based on the graffiti of Belfast cause it was incredible. Usually I don’t like graffitti. It’s like little dogs peeing against the wall leaving their mark. But in Northern Ireland it expresses so much about the situation there. 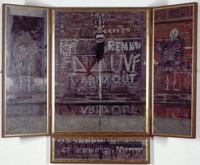 One day I saw a little boy playing on a lamppost, hanging from it, and I thought, it looks just like he’s been crucified. So I gave him 50p to go back up and hang there for a while and did a drawing of him.

Then about a year later I found the wall in Shanker Road, which was the Protestant area of Belfast. The wall said “Remember 1690,” which was history, and “UVS,” which was politics, and “No Pope here,” which was religion, and it said “Army Out.” And I remember when I saw that wall I said, good lord, there are all the reasons for the crucifixion: history, politics, religion, and the Roman army. And then I remembered the boy, and decided I’d do a painting of the two together, in part because by this time I’d become involved with the plight of children there. I felt like the children were losing their childhood because of what was going on.

I think the most interesting bit is drawing rather than using cameras. Drawing is a way of seeing. When you draw you see it, when you photograph it you don’t. I’m not saying photography isn’t art, but it’s a totally different process. People would ask me, “Why’d you go out there and spend all that time in different places? Why not take pictures?” I told them, I want to make drawings that go in to the life of the solider. When you take pictures there’s much more interpretation by the person that looks at the photos. It was to do the drawing that was very important to me, not just to make pictures.