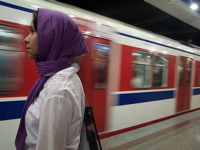 Just a quick placeholder here for an upcoming show.

We’re following up on our show To Iran, Like Nixon to China with a look at Iran’s democracy. And its demographics. Seventy percent of Iran’s population is under 30; Persian now ties French for the second most-used language in the blogosphere. So they’re young and they’re part of the Internet; how can we understand Iran’s limited and theocratic democracy?

We’re hoping to pick up where last week’s show left off, and to get deeper inside Iran’s situation tonight. The definition of victory, to use our internal O.S. language, is to move past straight politics and toward a better understanding of Iran’s cultural cross-currents. Some of the strands of the discussion: what can be learned about Iran from its technologically savvy youth; the emerging power and politics of the blogosphere; and — whether it’s in films or blogs or underground newspapers or coffee shop discussions — how the coded language of dissent actually works.

The underlying question for all of this is the tension between the secular and the religious in a country that was listed by George Bush as one third of the axis of evil, and has been high on Western radar — for its nuclear ambitions, or Ahmadinejad’s denunciations of Israel, or the earthquake, or reading Lolita — ever since.

To answer these questions — and, perhaps more importantly, to ask some new ones — we’re turning to a young, diverse (Iranian/French/American, American, Iranian/British, and Iranian/Canadian) female-heavy group of writers and thinkers:

Author, We Are Iran

What am I doing here? Late in our show What John Murtha Wrought, Chris asked the question “What would your ideal President do now in Iraq?” Anatol Lieven, a senior research...