I think, on the military front … that we have the mix, strategically and tactically. We’re on the right track at this point. … I wouldn’t use the term Iraqization. I think it … reaches back into history. I think we have to look at Iraq as being a unique case in and of itself, and to do less than that would be unfair to the Iraqis and unwise. 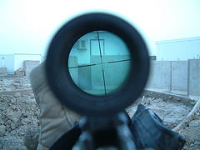 The military strategist Stephen Biddle doesn’t mince his words: Iraq is in the midst of a “communal civil war,” he writes in a recent Foreign Affairs article, and although it’s being fought at “low intensity” right now, “it could easily escalate if Americans and Iraqis make the wrong choices.”

The problem, as he sees it, is that the Bush administration’s main tactics right now — democratization and “Iraqization” — are fueling rather than dousing the fire. Democratization is solidifying ethnic and tribal identities, Biddle says, and Iraqization is inflaming them.

His answer is for the U.S. to play diplomatic and military hardball: to pit Sunnis, Shiites, and Kurds off one another — to put the fear of an all-out civil war in their hearts, basically — as a way to force each party to accept a constitutional solution that will enshrine a lasting and fair distribution of power.

Belgium and Switzerland are Old Europe’s examples of the kind of carefully orchestrated federated state Iraq could become. But the real model, the one where the blood has only recently begun to dry, is Bosnia. It’s time we forgot about the Vietnam prism, Biddle argues, and put on our Balkan glasses.

A new model is one thing, but how, exactly, would this arm-twisting work? How do you work the stick, and how big is the carrot? And is Khalilzad the man for the job? If not, who is?

And domestically, how would you begin to swing this? When Iraqization — following the Vietnam model and boiled down to the “when they stand up we’ll stand down” formulation — is the official policy, how do you switch course and forget about training an Iraqi security or police force? And can we imagine this Administration doing that any time soon?

Marine veteran of the Iraq War, currently serving with the reserves

How Do You Leave a Country?

Click to Listen to the Show (24 MB MP3) And what happens when you do? On Wednesday the President will reveal the details of his already much-publicized plan to increase troop levels...