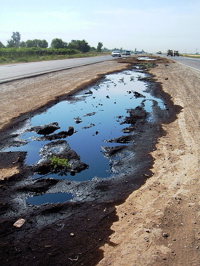 An oil spill in Iraq. According to the photographer, “this spill was left for months before it finally soaked into the ground.” [Dave Chung / Flickr]

To accomodate our UK guests, this show will record at 4pm EST.

Among the figures quoted in the Iraq Study Group Report — about things like troop levels and civilian casualties — one number nearly jumps off the page. According to the report, 150,000 to 200,000 — and perhaps as many as 500,000 — barrels of oil are stolen every day.

Between violent chaos and lax metering, Iraq’s oil is being siphoned off, smuggled, and disappeared barrel by barrel. The guilty parties include Sunni insurgents who realized it was more profitable to take the oil than blow up the pipelines, Shiite militias fighting each other for control of oil in Basra, criminal gangs looking to make quick money, and ordinary Iraqis who make a better living selling subsidized fuel to illegal traders than running their own legitimate businesses.

Meanwhile, the future of Iraq’s oil industry is being negotiated right now in the Iraqi Oil Ministry, the halls of Parliament, and the American State Department. The laws up for discussion will shape control of Iraq’s oil reserves — estimated at 110 billion barrels — for decades to come, and are widely controversial. Two main areas of debate are:

Federal vs. regional control: Who should have the authority to manage existing oil resources and broker agreements with foreign oil companies? The Kurds are pushing for regional control as part of their separatist aims in the oil-rich north, and in October passed a draft petroleum act stating that “Kurdistan has sole authority in respect of petroleum operations in Kurdistan and in the ‘Disputed Territories’, where Kurdistan is party to the dispute, including Kirkuk.”

We don’t want to rehash the now obvious place of oil in the litany of reasons America invaded Iraq. We do want to get into the oil fields and the corporate back room negotiations to understand what’s happening right now. Is finding and brokering a quick solution to the oil situation crucial to tempering sectarian tensions? How much pressure is still coming from America and American-owned oil companies? Does the Iraqi government have the money to develop new oil fields or fix existing infrastructure without the help of the US or foreign oil companies? How should Iraq manage this most valuable resource, and what’s the best-case scenario for the future of the oil industry there?

Author, The Least Accountable Regime in the Middle East, London Review of Books, 11/2/06

Click to Listen to the Show (24 MB MP3) Thanks to brent for pitching us a show about the Kurds. [This show will record at 4pm EST.] When we did our show on...