What war does, what violence does, is that it somehow sucks life out of people. It turns them into… one-dimensional, flat creatures. For a writer interested in the work of imagination and creativity… to reintroduce and affirm the importance of art in the life of a people, not only the content, but also art as form, as manners of doing and looking at things… that’s to tell [people] that humanity is not just about surviving, not just about an ultimate purpose like jihad or freedom or democracy… Humanity is far too complicated and too rich. 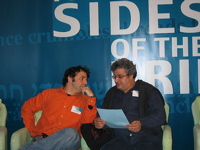 We first read about Etgar Keret and Samir El-Youssef in Lisa Goldman’s blog two weeks ago. They’re both writers — of novels, screenplays, short stories, essays, and comics. Keret is an Israeli, El-Youssef a Palestinian who grew up in a refugee camp in Lebanon and now lives in London. And they’re friends.

In the culmination of another shattering week of news, and of Open Source shows about Israeli approaches to the war, the optics of the conflict, and a generational history of the Muslim world, we’re talking to these two friends together.

We’ll be talking about a writer’s consciousness in war, and a writer’s identity in a war-torn region. About what it means to be a Palestinian author or a Muslim one, an Israeli author or a Jewish one. We’ll ask them about literature as a path to empathy, or as an experience of the other, or simply as a ticket out. We’re wondering: Who speaks for Palestinians? For Israelis?

And we’re also wondering: If you were at the after-dinner table tonight, with an Israeli and a Palestinian friend, what would you talk about?

Author, Pizzeria Kamikaze and The Nimrod Flipout, among others

Harry, Etgar Keret on the elections, the view from here, April 2 2006.

The writer Etgar Keret was our Open Source witness in Israel two years ago to a general (local, global, existential) disbelief and alienation from the war on Lebanon. And...