Can Israel find a modus vivendi with the democratically elected leadership of Palestine?

This is a very difficult dilemma. Do you support corrupt, unpopular, oppressive dictators? Or do you find yourself with fundamentalists who are democratically elected? The trick must be to create a third option for the Arab world in general and for the Palestinians specifically. 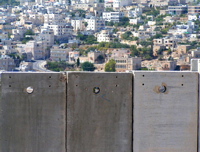 Can Israel — must Israel — find a modus vivendi with the democratically elected leadership of Palestine? To wit: Hamas?

Will a watching world — and the democracy-builders in the Bush administration — let Israel ignore, or undo, the popular votes that gave Hamas a clear majority in the Palestinian parliament?

Should the seating of a new Palestinian government be conditional on Israel’s blessing, or on Hamas’ enunciation of a new identity?

The New York Times’ ace in Jerusalem, Steve Erlanger, broke the news on Valentine’s Day that the US and Israel are already talking about ways to “destabilize” the Hamas regime, even before it is named:

The intention is to starve the Palestinian Authority of money and international connections to the point where, some months from now, its president, Mahmoud Abbas, is compelled to call a new election. The hope is that Palestinians will be so unhappy with life under Hamas that they will return to office a reformed and chastened Fatah movement.

What sounded like pro-forma denials discounted Erlanger’s scoop. But then over the weekend came details of the starvation diet being planned. The Israeli Cabinet decided to withhold $50-million worth of tax revenues for the Palestinian Authority, with more sanctions to follow if Hamas does not recognize Israel, disavow violence and enlist in past agreements between Palestinian and Israeli authorities.

We want to open a conversation on Wednesday on the threat, if that’s what it is, from a government that Palestinians elected in a spirit of anti-corruption reform, if not of “moderation.”

We’re interested in all the ways that the end of the Sharon era in Israel and of the Arafat/Fatah era among the Palestinians connect historically, thematically, perhaps causally with eachother. And of course we want to know what people observe to be the outstanding hazards and other more promising possibilities that may now be at hand.

Our guests will be Steve Erlanger of The Times and Ari Shavit, the political essayist of Haaretz, the center-left daily paper (and website) in Jerusalem.

Ari Shavit’s profile of Ariel Sharon in the New Yorker last month, drawing on years of recorded conversations between the two wary but respectful men, struck me as a breakthrough in grasping Sharon and a great leap forward in profile style. Have a look at Shavit’s conversation with Amy Davidson of The New Yorker about The Samurai of Zionism.

“Ideologically, Israelis have never been more dovish,” said Ari Shavit, an essayist for the Haaretz newspaper. “But that dovishness is based on the condition that there is a partner we can trust. If so, people are ready to give back everything. The overwhelming majority is now for a two-state solution. But we have become sensible at the very moment that Palestinians have lost their senses.”

Then please lay down your own lines here for an evolving relationship between Palestinians and Israelis.

Click to Listen to the Show (24 MB MP3) Hamas is trapped. They have an agenda, but they never dreamed to be in full power. Now, Fateh pushed them in...