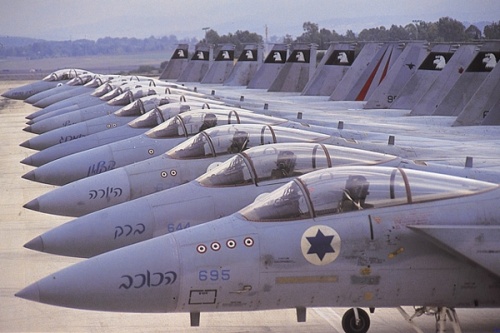 Our many shows about a possible showdown with Iran — most recently with Seymour Hersh last week, but also here, here, here, and here, just to name a few — had, in retrospect, a rather myopic focus. They all looked squarely at the U.S.

Israel, it turns out, has been having its own debate, which boils down roughly to this: if sanctions don’t work, and an Iraq-chastened Uncle Sam won’t bomb Iran, should we? Yossi Klein Halevi and Michael Oren, writing in The New Republic , say yes:

According to Israeli intelligence, Iran will be able to produce a nuclear bomb as soon as 2009. In Washington, fear is growing that either Israel or the Bush administration plans to order strikes against Iran. In Israel, however, there is fear of a different kind. Israelis worry not that the West will act rashly, but that it will fail to act at all. And, while strategists here differ over the relative efficacy of sanctions or a military strike, nearly everyone agrees on this point: Israel cannot live with a nuclear Iran.

Halevi and Oren linger on Ahmadinejad’s Holocaust denial. They warn of “a new strain of Shia apocalypticism.” They quote Ayatollah Hussein Nuri Hamdani, who declared in 2005 that “the Jews should be fought against and forced to surrender to prepare the way for the coming of the Hidden Imam.” And they advocate a preemptive, decisive (though conventional) strike on Iran.

Derfner is betting on the mullahs’ innate sense of self-preservation: that no matter how abhorrent their rhetoric or scary their weapons, they wouldn’t risk the nearly total destruction that would follow an attack on Israel. In other words, the seemingly terrifying notion of a nuclear Iran wouldn’t change good old nuclear deterrence and its sobering calculus of mutually assured destruction.

It was a civil, if grim debate, one that turns to a large extent on your reading of Iran’s particular balance of rationality and madness. Both Halevi and Derfner agreed that a preemptive strike on Iran would lead to catastrophic reprisals against Israel — including, most likely, the use of chemical and biological warheads. But that’s just the price Israel might have to pay, Yossi Klein Halevi argues:

Why, then, bring certain, terrible war upon us when it is not at all certain that Iran will use the bomb? That’s the question Israelis need to ask ourselves as we contemplate our options. One argument for a military strike was provided by our article: Merely by possessing the bomb, Iran may well trigger massive Israeli emigration and flight of foreign capital, as well as plunge the Middle East into a nuclear arms race. The deeper argument, though, is that, as the state created to offer refuge to the Jewish people, Israel simply has no choice. If the alternative is between certain conventional or even chemical war which Israel will survive, as opposed to possible nuclear war which Israel will not survive, it seems to me that no reasonable Israeli government can opt for the latter. Arguably no other country faces such a cruel dilemma.

Is this the dilemma you see?

Author, Power, Faith, and Fantasy: America in the Middle East 1776 to the Present

Extra Credit Reading
Yossi Klein Halevi and Michael Oren, Israel’s Worst Nightmare: Contra Iran (registration req.), The New Republic, January 26, 2007: “The French philosopher André Glucksmann has noted that, by threatening to destroy Israel and by attaining the means to do so, Iran violates the twin taboos on which the post-World War II order was built: never again Auschwitz; never again Hiroshima. The international community now has an opportunity to uphold that order.”

Larry Derfner, A TNR Online Debate: Israel v. Iran (registration req.), The New Republic, February 6, 2007: “Where I disagree with you is that 1) I think Israel can live with the risk of Iran launching a nuclear first strike because the chance of this actually happening, in my opinion, is nil, and 2) I think a preemptive Israeli strike against Iran’s nuclear facilities poses much, much greater risks.”

The Greatest Threat, SerandEz, February 22, 2007: “Why would Russia et al ever get involved? Why would this be worse than Osirak in 1981, which had more international support and led to… nothing? In the grand scheme of “world peace”, the world now looks back on that incident with a huge sense of gratitude towards Israel.”

Confused, Maybe Not, Iran, Israel, and Apocalyptic Questions, Philosophers’ Playground, February 2, 2007: “A nuclear Iran will be able to conduct its militias, such as Hezbollah, with impunity. (Remember when the Israeli Embassy in Buenos Aires was bombed by Hezbollah in the early 1990’s? And the Jewish community center in Buenos Aires was bombed? How would one respond to such conduct if Iran had nuclear weapons?)”

Marvin Schick, Containing Iran, Marvin Schick, February 9, 2007: “There are many in Iran, including parliament members and other influential people, who openly oppose Ahmadinejad. There is a decent prospect that containment can work, both to buy time and to provoke political and attitudinal changes within Iran.”

Rick Moran, Israel’s Dilemma Over Iran, Right Wing Nut House, February 25, 2007: “There are those who do not take the Iranian President at his word that he will “wipe Israel off the map.” But if you are an Israeli government official charged with the safety and security of your tiny nation, you cannot afford the luxury of wondering whether Ahmadinejad is serious or not.”

Israel, Iran and Deterrence, NewDonkey.com, February 8, 2007: “what’s riskier for Israel? Relying on the 100% success rate of nuclear deterrence against nuclear attacks since Hiroshima? Or unleashing a regional war at a time when the furies that would unleash are undoubtedly horrifying, not least for Israel?”

According to Israeli Mossad estimates — and this is from Mossad, which under the current government is really rather left of center — that the current regime in Iran is willing to give up about fifty percent of its population to destroy the state of Israel.

I am skeptical about whether the Syrians would join in, and I find fault in the maximalist logic, the fear that Egypt and Jordan — both of which have peace treaties with Israel, for which Israel has made significant territorial concessions — would join in a war once Israel was perceived as being on the losing side.

Of the many many people we interviewed for this article, Yossi Klein Halevi and I, we found nobody who believed that Iran was acquiring a nuclear weapon to launch an immediate strike against Israel, absolutely nobody. I don’t believe that either. As I mentioned earlier, the far graver danger is one of economic strangulation, and of the nuclearization of the entire Middle East, the end of all non-proliferation. That is a far greater danger. But you can’t eliminate entirely the possibility of a nuclear strike from Iran, and I would hate to be the person who would make that gamble.

If you judge countries on the basis of what they do, more than on what they say, then there was much more reason to be afraid of Russia and China than there is of Iran. I mean, Stalin had nuclear weapons. Mao Zedong had nuclear weapons. They slaughtered tens of millions of their own people. Some people think they were clinically insane towards the end of their lives. America believed in MAD, but to say that America was sanguine about the threat of Russia or China lauching a first strike against America is not correct. America was scared stiff.

You asked earlier, Chris, whether this was a generational divide. Here are people who are rockstars singing about this, and most of them incidentally come from North African background, Jews from Arab countries. Almost invariably their grandfathers, great-grandfathers, parents, were not directly impacted by the Holocaust.

It’s Iran, again, at the center of a tricky, dangerous puzzle. Four years after Donald Trump broke out of the nuclear ban agreement, Iran is just days or weeks away...