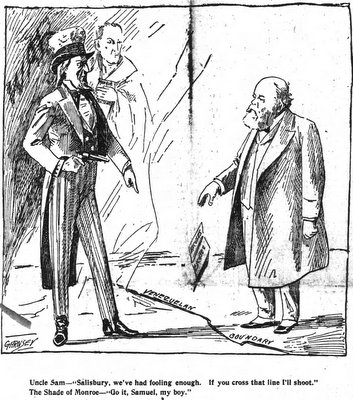 James vs. Roosevelt: Letters to the Crimson

James vs. Roosevelt: Letters to the Crimson Jackson Lears has dramatized the relationship between Theodore Roosevelt and William James, but evidence of that conversation is actually hard to find. We turned up one interesting chapter in the conversation turning around the Venezuelan Crisis of 1895, and playing out in the pages of the Harvard Crimson — read on.

If you have forgotten the particulars of the Venezuelan Crisis of 1895, or never knew them (as I didn’t and still don’t), know only that Lord Salisbury’s government had hoped to reclaim as part of British Guyana territory on the other side of what was known as the Schomburgk Line — territory that was also considered part of sovereign Venezuela. President Grover Cleveland, in his second term, forbade the British claim from going forward, threatening war and toughening the Monroe Doctrine in the process. It was part of the long story of the United States expanding its interests, toward becoming the global police force that it is today.

The decision was well-received in Venezuela, according to a report filed in The Independent by the journalist Kate Foote Coe. She described a warm reception of American intervention that present-day presidents can only dream of:

Mr. Beurres, who is the son of the Venezuelan Minister to Washington, mounted on a chair, read a very excellent little speech in good, clear English… “La Gran Republica del Norte,” which had bought its liberty with a struggle in years past, proud and prosperous now, was yet magnanimous enough to look with friendly eyes upon its sister Republics. Through President Cleveland it had spoken, and they the people were there to express to the full their appreciation of this act…

The news of Cleveland’s warlike posture against the British was not as well received in Cambridge as in Caracas. A Crimson opinion enumerated problems with the plan: it amounted to imperial meddling to stop imperial meddling, it promised dangerous and entangling protectorates, and it misunderstood Monroe, among others.

This amounted to too much mollycoddle for Theodore Roosevelt, distinguished alumnus and soon to be Secretary of the Navy. On January 7, 1896, he wrote the Crimson in protest, blaming “stock-jobbing timidity, the Baboo kind of statesmanship” for inevitably bringing about a worse war later on. (A similar criticism resounds today of President Obama’s decision not to arm Syrian rebels years ago.)

There was history here: according to the historian P. K. Dooley, when James was teaching and Roosevelt, a student, stood to speak, he “realizing that little would be gained in a debate, responded by ‘settling back in his chair, in a broad grin… and waiting for T.R. to finish.’” But here James is chastising Roosevelt more harshly, particularly for daring to imply that President Cleveland’s course should not be questioned. Embedded in the rebuke is a beautiful depiction of the political university:

May I express a hope that in this University, if no where else on the continent, we shall be patriotic enough not to remain passive whilst the destinies of our country are being settle by surprise. Let us be for our against; and if against, then against by every means in our power, when a policy is taking shape that is bound to alter all the national ideals that we have cultivated hitherto.

Today, Cleveland’s tough stance is applauded as smart foreign policy. In retrospect James looks like a crank, or overcautious. It raises the question: more than a century later, with the ‘crisis’ long forgotten, are we still more sympathetic to the upstart Roosevelt, and his fear of unmanly dissent, than to his teacher, the one who taught America good sense? And why?

Thanks to the staff of the Harvard Crimson for allowing us to review these letters as they originally appeared.