Maybe we’re jealous of the animals. We’re a little too smart for our own good and we worry all the time. It’s a longing for innocence, an attempt to be a child again. [For furries], these suits create a bubble Disneyland that follows [them] around wherever they are. That’s how they talk: ‘This is me. I am this. This body in front of you: this isn’t me. What I really am is this fantastical creature that I am describing to you.’ . . . They really believe very strongly that they are an animal and not a human. 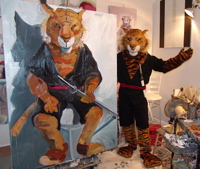 Otin the tiger with his portrait [Jay Van Buren/ Flickr]

Our show on anthropomorphism sparked a comment from Jay Van Buren, a Brooklyn-based artist and web designer who paints portraits of “fursuiters”– people who express an animal alter-ego by wearing full-body animal suits. We called him up to get an artist’s view of this particular brand of anthropomorphism.

Van Buren told us about the world of fursuiters, which is part of a larger subculture of “furries” — people who love, admire, and identify with cartoon-like, humanized animals. Furry fandom, as it’s called, is often dismissed as a bizarre sexual fetish (and yes, some furries do indeed enjoy the idea of having sex in their “fursonas”), but many furries see their interests as something more holistic: a fascination with “anthropomorphic” animals.

Anthropomorphic or ‘humanized’ animals have been with us since the dawn of civilization. From the gods of ancient Egypt to the advertising icons of the modern day, people of every culture have created fanciful creatures simply by imbuing animals with human traits. Only within the last two decades has anthropomorphic or ‘Furry’ fandom been recognized as a distinct fan-base in its own right. Fans are found in all corners of the world, and come from all races and ages and creeds. We are bound together across the most daunting barriers by our mutual admiration for these beasts of myth and legend who, by simple reflection, give us a better window into ourselves.

As Van Buren has witnessed, putting on a fursuit is not only a profound and transformative experience for a furry, but also for an observer. While Van Buren was working on a portrait of a tiger fursuiter, he had a drink at a bar with the man inside the suit. When they finished, the tiger got back into character:

He puts his head back on– and I’m scared for a second! Otin the tiger’s character is very stoic—he’s got a sword, which is a real samaurai sword, by the way. And he’s very straight-up and serious. There’s a total transformation in the way that he acted.

Van Buren, who calls himself a “fan of furries,” has painted large, detailed portraits of six furries to-date as part of what he calls the Fursuit Portrait Project. (Along with the tiger, his subjects have included a rabbit, a wolf, and a “fox-coon.”) By painting people in fur suits, he says, he’s tapped into a well of artistic innocence and freshness as well as a rich vein of American anthropomorphic folk art.

These people are very proud of their suits, and they work very hard on them. The tiger guy—his suit looks like a real tiger. They’re happy to see themselves depicted [in my paintings], and they’re happy to have someone taking [their transformation into an animal-person seriously] . . . It’s more this idealized version of an animal, instead of anything having to do with actual nature. We’re living in this postmodern world where there almost is no nature—there’s only culture. So we’re trying to get back some connection with nature, but the only way we can think of is through Bugs Bunny.

I think half of the comments from the Anthropomorphism show’s thread, aside from the story-telling angle, still apply to this discussion. Is there anyway to repost them? Or compile another...

Click to Listen to the Show (24 MB MP3) As we first touched upon in our anthropomorphism show, the world of science is offering up a lot of interesting new research...