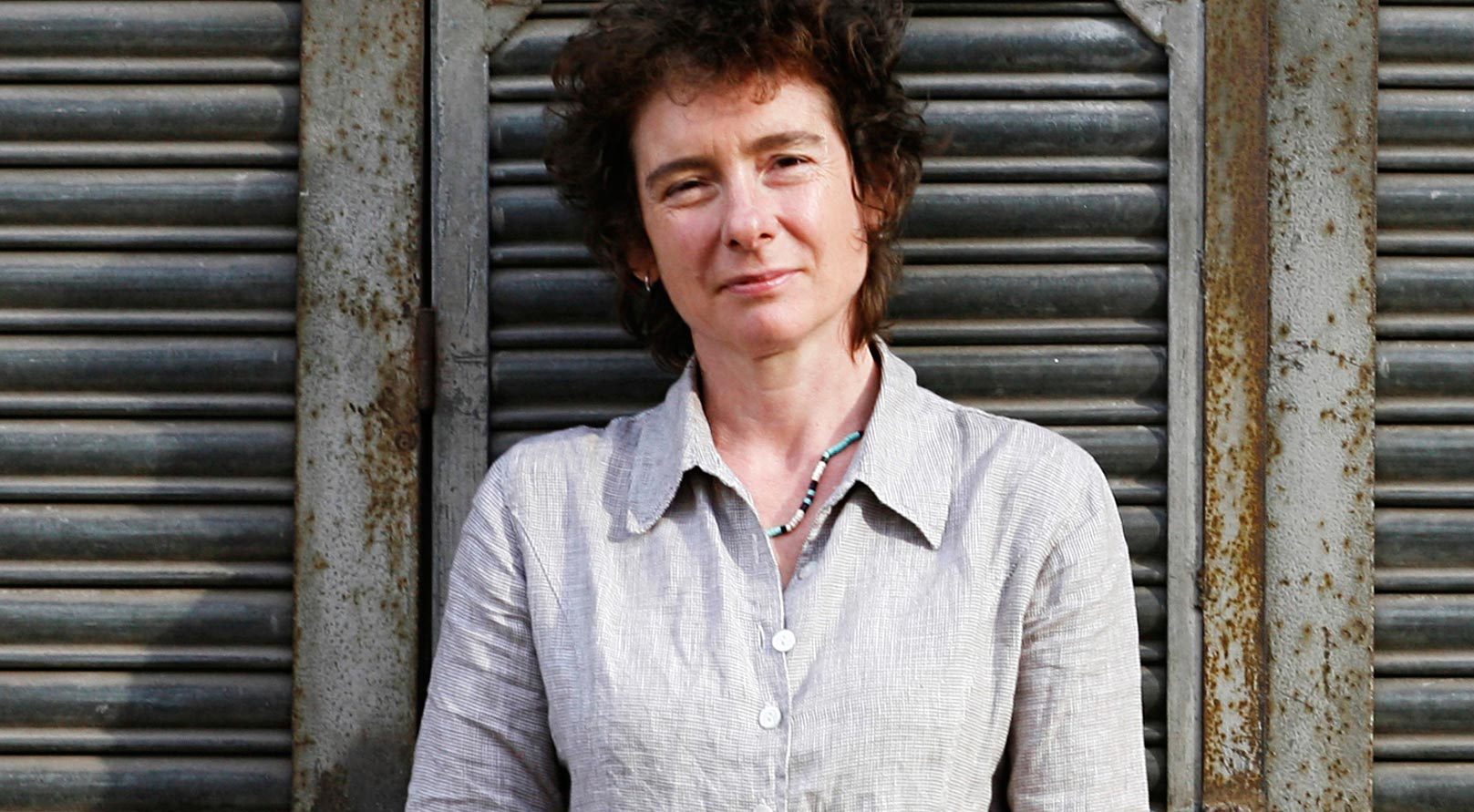 "I love that part in the Gospel where Jesus says: 'The kingdom of heaven is within you.'"

Jeanette Winterson: What it Takes, in Letters and Life

She was a flamboyant depressive; a woman who kept a revolver in the duster drawer, and the bullets in a tin of Pledge. A woman who stayed up all night baking cakes to avoid sleeping in the same bed as my father. A woman with a prolapse, a thyroid condition, an enlarged heart, an ulcerated leg that never healed, and two sets of false teeth — matte for everyday, and a pearlised set for ‘best.’

From the opening of Jeanette Winterson’s memoir, Why Be Happy When You Could Be Normal?

Jeanette Winterson is the real thing — on the page, in life’s rough and tumble, and in our quick forty-minute feast of gab. We’re in the Lenox Hotel in Boston, where Red Auerbach and his Boston Celtics used to live. But I’m pinching myself and thinking: this could be Charlotte Bronte I’m sitting with, or George Eliot. How long did it take her, I ask, to write that opening bit on her monster of an adoptive mum?

Perhaps it was 25 years’ work; I mean, you do get somewhere after all this time. I like to write short sentences and I like to make the language work hard. One of the things I wanted to do from the very beginning was to take the disciplines, the intensities, the density of poetry and to fuse that language with the stretch of narrative… You do get to something like a moment of grace by now, I suppose — when you’ve taken language apart so many times, the way boys take engines apart and put them together again. That’s always been my relationship to language. It’s something I understand as a place of delight for me… I do enjoy writing. It isn’t torture for me to be in my studio working. It’s a great pleasure…

It was Mrs. Winterson who impelled Jeanette to run away and make her home in a Mini when she was 16, but it was that same Bible-belting aphorist who left this unwanted step child her legacy of words.

My mother died when I was 30… It’s taken me another 20 years to reconcile myself to that place. But I have done so, and it feels a lot better and I’m very happy to have done it. With my biological mother — with Bio Ma, as I call her — I wouldn’t have had the education, and I wouldn’t have had the books, and I wouldn’t have had all the things I had to push against. That’s why I’m glad that I had my own crazy upbringing, however difficult, however painful. You know, a lot of people who’ve been adopted imagine that there will be some important reunion, and that they’ll find something that they can’t feel, because they imagine it’s in their DNA. DNA is so fashionable now. We think everything is about biology. I really don’t think it is…

A three-day exorcism in Mrs. Winterson’s church was the excruciating finale of the torture Jeanette fled. What’s fascinating in conversation is her ease nonetheless with words like “grace” and “faith” and “spirit,” and the respect that abides for the language of church and scripture and the human need that draws people to them. You don’t walk away, she is saying, from a childhood steeped in the Bible.

You can forcefully drag yourself away, and then people tend to become fundamentalist in the opposite direction. They become so vehement in their denials of any spiritual possibility that you wonder what it is they’re so nervous about. For me anyway it’s easy to sense and to feel at home in a spiritual dimension, in the world and in me. I have a lot of energy and a large energy, and it feels connected. I don’t feel solitary and isolated. I feel involved in something much bigger, but I do think that’s the creative force that pushes through. So I’m happy to take my truths wherever I can find them, and there’s plenty in the Bible. It’s a good book, and I wish the religious right would actually read the Bible. You know, then we might get somewhere. I mean, I don’t see Jesus giving tax breaks to big corporations. I see him hanging out with prostitutes and the poor and the dispossessed. Hold on: didn’t you read this bit? And I love that part in the Gospel where Jesus says: ‘The kingdom of heaven is within you.’ That’s a profound comment. And if it’s within us, that’s where we ought to be looking. It means it’s not in the world of commerce and shopping and busyness. And it can’t be found in organized religion, because it’s in, and not out.

Then there’s the tart, refreshing Winterson voice on politics. Britain’s Prime Minister David Cameron made a state visit to the US a week before Jeanette Winterson’s book tour in America. I am venting my irritation with the neo-imperialist — or maybe eternally imperialist — British impulse that has insinuated itself into American chatter (think: Andrew Sullivan, Niall Ferguson, Christopher Hitchens), grievously since George Bush enlisted Tony Blair in the Iraq War that only Blair might have headed off:

Unfortunately what you’re hearing is the broad consensus from England. Tony Blair is responsible single-handedly for the Iraq War, there’s no question of it. Having him as the Ambassador for Peace in the Middle East is like putting the mosquito in charge of malaria. He is really a terrible man, and I think that’s pretty much felt in the UK. But we can’t give up our imperialist ambitions. It’s ridiculous, it’s absurd. But they’re there. I just hope that this war-mongering won’t continue. I mean, I think it might. I’m sure we’re going to cause much more trouble in Afghanistan. I’m sure that there’s going to be enormous amounts of trouble with Iran next… Britain is a bit of a lost cause at the moment, because we have no money; it’s all been spent. All we’re doing is cutting the economy, putting in austerity measures. You know, it would suit us now to have a war, because wars allow people to be distracted from what’s happening in their own country… In all this global economic breakdown, nobody seems to be saying how much that war cost and how much these wars go on costing. We can’t afford welfare but we can afford endless amounts of war. And that seems to me completely wrong, but nobody will talk about it. I don’t know what happened to Christopher Hitchens at the end of his life. He started out as a radical. He ended up as a despot… This is the Messiah Complex that people seem to get. I mean, George Bush had it. Tony Blair had it. They believe somehow that it’s up to them, and that God’s telling them what to do. It’s deeply delusional and very frightening. And I wish that Richard Dawkins would address himself to that kind of megalomania instead of worrying about people who want to go to church at the weekend.

And finally, the fate of books in this Digital Age. I’m remembering a passage in Winterson’s Written on the Body, in which the nameless lover/narrator imagines “a Virtual life with a Virtual lover” and recoils. And this was 20 years ago. “For myself, unreconstructed as I am,” said Winterson’s protagonist, “I’d rather hold you in my arms and walk through the damp of a real English meadow in real English rain. I’d rather travel across the world to have you with me than lie at home dialing your telepresence.” Nowadays, Jeanette Winterson is a blogger who rejoices in the speed and range of the Web, and I am hoping she can make us love it.

I can’t make you love it, but I can make you use it for good, which is the best we can hope for. Of course I’d always rather have the real thing. Who wouldn’t? I don’t Skype my girlfriend when I’m on tour — which I suppose is the telepresence I was thinking of 20 years ago — because I hate it! It makes me feel lonely. It doesn’t make me feel connected. I’d rather know that I’ll see her in two weeks because I can live imaginatively in my head… However there are advantages. The Web is exciting, and it does allow for other possibilities. I hate Facebook because it makes me feel like I’m in a Soviet apartment block. But I like Twitter because I enjoy the formal constraints of the 140 characters to try and Tweet something interesting instead of something banal. But the thing is: this is our time. We’re living in it. And you can work to change it, but you also have to do your best within it. And I’ve got no time for the sort of cynicism and the handwringing that a lot of writers go in for, as Jonathan Franzen does. This is our time, and there are kids growing up who are digital natives and will know everything about this media. There’s no point telling them it’s rubbish and they shouldn’t be there. What we have to do is work with it.