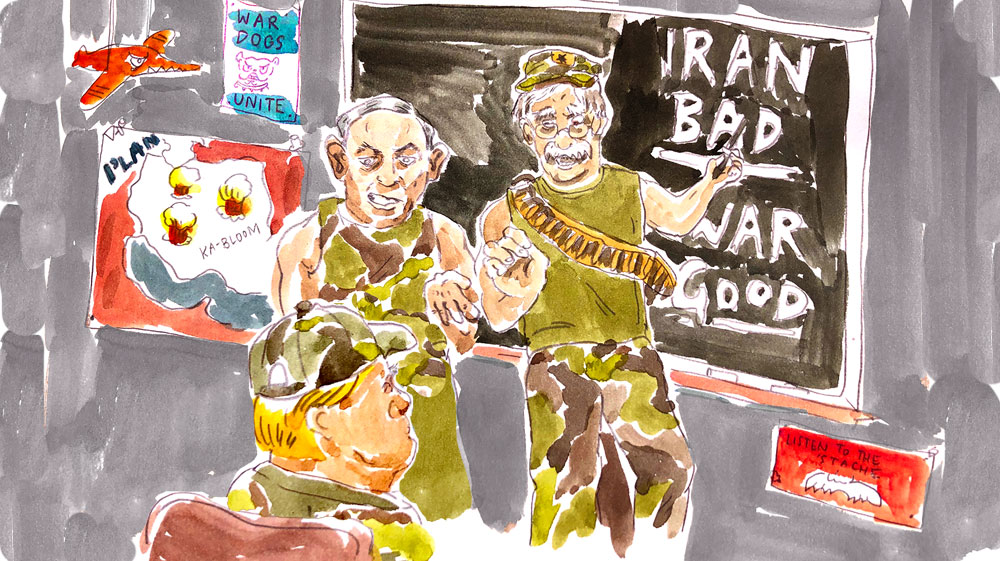 This is disturbingly familiar.

Three guys walk into a bar in the Middle East. A Saudi: bin Salman. An Israeli called Bibi. An American—call him Donald. They all know one thing deeper than deep: they hated that nuclear deal with Iran, and now they’ve trashed it. They didn’t like that Obama guy, either, who sold the deal. It’s Iran that clings to the no-nukes deal, maybe just for the standing that comes with it in Europe and China; maybe it’s Iran’s dignity in the deal that the three guys hate most. None want to own a real war with Iran. But think about it: what might they do in a winking alliance, together? Like: outsource the scary war talk to that fourth guy, with the mustache? We’ve seen a lot of this movie before, have we not? The crackling threats to punish unproven charges: it was weapons of mass destruction the last time; now it’s some unverified damage to tanker traffic, maybe. Again, the case is being made for a war of choice, by a pick-up “coalition of the willing”—this time, it would be an alliance of Sunni Arabs with the US and Israel, against Iran. Out front beating the war drum is the man with the mustache, John Bolton, who’s always loved “regime change” for Iran, who still defends the Iraq War, and who now runs the national security desk for President Trump, dropping phrases like “unrelenting force” against Iran if Iran should threaten or damage us. Part of what’s familiar in the picture is that Congress is largely out of the loop and the sovereign people are not in on the argument. A lot of what you can hear on the news is circus stuff, like the President’s lawyer, the sometime Mayor of America, Rudolph Giuliani, chanting, “Regime change!”

Who Is Matt Duss, and Can He Take on Washington's 'Blob'?
David Klion

It’s Iran, again, at the center of a tricky, dangerous puzzle. Four years after Donald Trump broke out of the nuclear ban agreement, Iran is just days or weeks away...