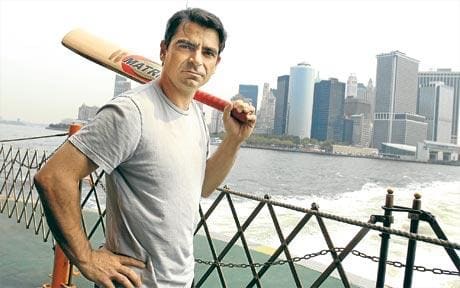 Joseph O’Neill’s Netherland: the Novel of the Age

Joseph O’Neill’s Netherland: the Novel of the Age

I make two guesses here: that Barack Obama knows almost as little about cricket as I do (which is: zero); and further (much more interesting) that the president has found in Joseph O’Neill’s cricket-in-New York novel Netherland a sort of founding text for this turnabout era, this reconciling moment we seem to have entered, this Age of Obama. 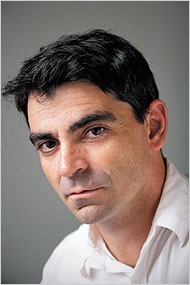 Everybody knows by now that Netherland has been Mr. Obama’s bedtime reading this spring. This is said to mean that our president is not all-wonk, that he still has a writer’s appetite for imaginative prose. To me it’s downright strange that nobody goes on to ask: but why this book? and what might it mean to him? These are the questions I’m chasing down here with the author.

The affinities between O’Neill and O’Bama are delicious. O’Neill, like the president a fine amateur athlete, had been playing cricket on Staten Island less than 48 hours before we met in Boston. Like the president, O’Neill is a hybrid of two cultures: his father comes of a family of IRA tough guys from West Cork; his mother is the daughter of a Syrian-Christian-Turkish hotel keeper on the Eastern Mediterranean port town, Mersin, in Turkey. O’Neill grew up mainly in The Hague in Holland. He went to mainly English schools and has a law degree from Cambridge. O’Neill’s great work of non-fiction, Blood-Dark Track, a “family history,” could have been subtitled Dreams, and Nightmares, from my Grandfathers. At a White House ceremony recently, O’Neill told me that not the least of what he shared with the president was a raging urge to step outside for a cigarette.

In the near background of our conversation is the immortal Trinidadian cricket aficionado C. L. R. James (1901 – 1989) and his autobiographical masterpiece, Beyond a Boundary. People keep commenting on Joseph O’Neill’s debt to F. Scott Fitgerald and The Great Gatsby for this novel about a climber and halfway gangster, Netherland‘s Trinidadian-American Chuck Ramkissoon, who dreams a new American dream and ends up, like Gatsby, literally dead in the water. But O’Neill is in much deeper debt to C. L. R. James for his cricket vision.

James was an inspiring writer in the pan-African liberationist movements of the 1930s and after. He was a fierce anti-imperialist and, contrarily, an ardent champion of pre-imperial English culture (he had virtually memorized Thackeray’s Vanity Fair in his teens) and most especially of cricket, the country sport that the Empire took to the colonies. “Cricket is much more than a game for Mr. James,” as Neville Cardus of the Guardian put it; “it is a way of life.” 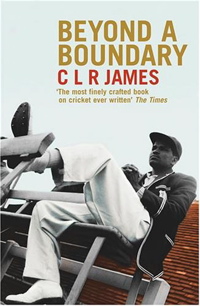 # 1 on sports, the West Indes, colonialism

“Cricket is first and foremost a dramatic spectacle,” James wrote in Beyond a Boundary. “It belongs with the theatre, ballet, opera and the dance.” Embedded in it, moreover, is a universal code of fair struggle and honor. Common phrases like “a straight bat” and “it isn’t cricket” became “watchwords of manners and virtue and the guardians of freedom and power.” James, who called himself “a British intellectual long before I was ten,” came to think that games were more expressive of a culture than poetry, drama and music, and that W. G. Grace, the Babe Ruth of 19th Century cricket, was a higher monument of English life than Queen Victoria. The game itself, he decided, was “the only contribution of the English educational system of the nineteenth century to the general educational ideas of Western civilization.” For black and brown West Indians, specifically, James found that schoolboy cricket had everything to do with self-mastery and liberation among a subject people. Club cricket and the international game turned out to be wide open to transformation by West Indian virtuosity. The starting point for C. L. R. James, as Joseph O’Neill recounts in our conversation, was that 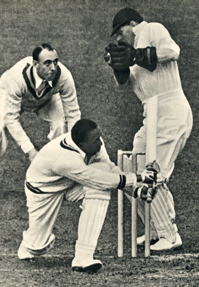 …if you were one of the members of a colonized race in Trinidad — there are two in Trinidad: an African population and a South Asian population, almost 50-50 — you were allowed very few forms of self expression. And one of those was cricket. It was one of the arenas where certain hierarchies were abolished. A lot of sports have that in common. And he thought that was a great thing, where people could have access to their souls on the cricket field… Also the trajectory of Trinidad in particular towards independence went hand in hand with the West Indies cricket team, gradually becoming a team which reflected the West Indian population and not of the colonists. Quite separately from those local things, he took it as a given that cricket, as he said, is like art. It’s a wonderful thing, and why should we diminish ourselves – we being the colonized people in this case – by persisting to see it as being owned by the colonizer? Why can’t we own this sport? So what if they made it up? Are we not just as entitled to the particular bliss and gratifications that this sport offers? And that is quite a big important statement to make. It’s a way of throwing off colonial categories of the world and it’s a way of laying claim to what the world has to offer. We see now in the way cricket is organized around the world that India is the main power in cricket, and will undoubtedly remain in that position for many years. And the old seat of power in London is not what it was… 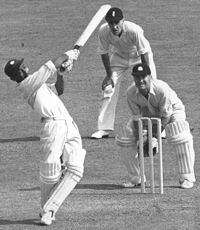 This is the thinking that Joseph O’Neill has learned from C. L. R. James, puts regularly into practice on the cricket grounds of New York, and has embodied in Chuck Ramkissoon, the most beguiling character in Netherland. It’s the thinking that feels like such a good fit with the First Reader in the White House.

If a novel confronts the American reader with the other, namely cricket, that is something that would obviously appeal to this President, who it seems to me is extremely interested in the tension between oneself and the other, and sees it as a very fruitful tension. I’ll put it another way: if there’s any American who could understand cricket, it is Barack Obama. And in many ways his platform is a Ramkisoonian platform, namely that the current boundaries (again the reference to James is intentional) of American vision have proved to be defective. They just have. And the Bush years represented a kind of catastrophic shrinkage of what it means to be American, and the idea of what the role of America in the wider world might be. Barack Obama, for autobiographical and intellectual reasons, is in a position to make another argument. I think so far he’s made it rather persuasively.

Click to Listen to the Show (24 MB MP3) Four summers ago, the city of New York opened back up at two every morning to watch soccer games in cities four...