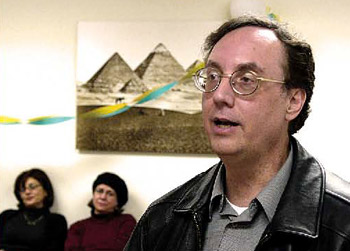 Juan Cole: Through the Fog of the Arab Spring

Juan Cole: Through the Fog of the Arab Spring Juan Cole‘s Informed Comment on the Iraq war made him, in my view, the Thucydides of our time — and one of the marvels of the age. That a Michigan historian of the Middle East could become an inescapable, provocatively independent daily commentator and critic of the war policy owes a lot to the freedom and ubiquity of the Web. It reflects still more Cole’s own classical standard and relentless drive to give us, as Thucydides did in The History of the Peloponnesian War, a gritty black-and-white account of events, drawn from a great variety of sources, not “to win the applause of the moment, but as a possession for all time.”

I’m asking him in conversation to take the killing of Osama bin Laden and this mid-Spring in the Arab revolt as a fresh starting point: are we looking at the beginning of the end, or the end of the beginning, as Churchill said; or an intermission in a permanent war?

It surprises me that Professor Cole approves the drone war (and says it’s popular) in the Tribal Areas of Pakistan, even while he believes the US counter-insurgency campaign in Afghanistan is doomed. He sounds troubled that the democratic wave (which he anticipated in Egypt) could be broken, maybe stopped in Syria. He is certain — having advocated the Western intervention and defended even the drones in Lybia — that the Qaddafi family will be brought down, even if it takes a while.

I am wondering how many double standards we Americans can juggle in our heads when the US is too-prudently late to the people’s party in Tunisia and Egypt; uncritical of nasty repression by Saudis, Bahreinis and Israelis; cautiously displeased with variations on the crackdown theme in Yemen and Syria; and committed militarily to the rebels in Libya. Juan Cole is saying it’s allright to admit feeling dizzy in the circumstances; but we should be noticing that Barack Obama has risen to the occasion as a Realist of the traditional foreign-policy school; and that Cole has confirmed his own best instincts as those of a “progressive internationalist,” not simply an anti-imperialist liberal.

I would argue that the Obama administration harkens back to Bush senior’s foreign policy ideals, which were those of the Realist school. I think Obama is not a classical Realist: he does have a sense of morality in a way that I think Henry Kissinger does not. But the Realist school posits that great powers act according to their interests, not according to namby-pamby ideals, and that, moreover, they ought to act according to their interests; if they don’t, it messes up the world. In every instance, the Obama administration stance has been what would be in the interest of the United States. It hasn’t been an idealistic or moralistic stance. I think it’s a reaction against the muscular Wilsonianism of the George W. Bush administration, which was very gung-ho to democratize the Middle East at the point of a gun…

I’m a progressive internationalist. I think one of the things that’s wrong with the world is that we have laws inside nations, but when it comes to international affairs, we have a jungle: the strong kill the weak and eat them. What the United Nations was about, from 1945 forward, was supposed to be the attempt to craft an international order that was founded on law. Qaddafi is not allowed to roll up forty tanks and fire live shells into the midst of a peaceful demonstration. That’s a crime against humanity and there ought to be sanctions for it. When the Arab League asked for a UN resolution, and when the UN Security Council asked that there be an international intervention, I thought that was a great good thing. It is in exact contrast to the Iraq war.

“One sympathizes with the Israelis” in this whirlwind, Professor Cole added. They’re “a floating fortress on the fringes of the Middle East.” Their natural instinct in the storm is to avoid any compromise in a changing neighborhood, but the “it will serve them poorly with the new Middle East democracies.” Juan Cole’s more urgent sympathy is with the Palestinians. “At the moment Israeli settlements on the West Bank are being expanded, and there’s no prospect that the Egyptians will be able to stop that process. I think the new Egypt will support the Palestinians’ bid for recognition as a state at the U.N. General Assembly in September. And once the Palestinians are widely recognized as a state — by the Europeans and Latin America — they’ll begin to have standing to sue” against the usurpation of property and human rights.

So I think over time international law and order which, again, is my hope for the future, will be deployed in the interest of the Palestinians. The real problem with the Palestinians is that, contrary to the intent of the League of Nations, have been denied statehood — have been denied in many cases citizenship. So they’re Flying Dutchmen. They have no citizenship rights, and a person in the modern world without citizenship in a state is vulnerable, open to predatory practices, and if their property is usurped they have no law court to seek justice in. So the whole Palestinian nation is stateless, therefore without basic rights or basic human dignity. It’s a crime. It’s a blot on humanity for the situation to go on like this.