Katrina and the Insurance Tsunami

Katrina and the Insurance Tsunami

I suggest that you do a show on how the insurance industry is crippling growth along the Gulf Coast. The Army Corps of Engineers has admitted in its own report that the flood was caused by design and construction failures, but it is not possible to sue the Army Corps of engineers. This means that 200,000 families have to fight with insurance companies and go hat in hand to the state government begging for scraps with which to rebuild.

This hour we’re taking Ray’s suggestion, asking: How could it have come to this? The insurance policies that Gulf Coast residents have counted on to rescue the region have instead become a major impediment to its reconstruction. Since Katrina laid waste to the Gulf Coast, policyholders charge that their claims have been denied or drastically devalued. Trying to understand the situation entails detangling a ball of red tape the size of a prize-winning pumpkin. Wind insurance doesn’t seem to cover hurricane damage; flood insurance doesn’t seem to cover waterlogged homes. Why, homeowners ask, are insurers focusing on loopholes in coverage while turning a blind eye to the holes in the roof?

About a month ago we filed a complaint against Allstate with the Insurance Commissioner in Louisiana….They get fools like me to pay them money every month for several years thinking I am insuring my house against wind and flood damage, and then after the largest natural disaster in this nation’s history, they don’t pay us. Instead, they pay some hack engineers to say it wasn’t windy enough during Katrina to make a house lean. And when it goes to court, Allstate will be able to claim they were simply relying on the opinion of “experts” and won’t be directly liable. And now Allstate has threatened to pull out of Louisiana if they are not able to drop coverage for 30,000 homeowners who they feel are too much risk. That would leave 220,000 homes without insurance. I had hoped that Katrina would have woken us up, and we would finally realize that our society needs more of a measure than just profit alone.

How awakened are we to the situation in the Gulf Coast? The “K” word wasn’t even uttered during President Bush’s State of the Union address. Perhaps he said it all in the immediate aftermath of the hurricane.

The good news is — and it’s hard for some to see it now — that out of this chaos is going to come a fantastic Gulf Coast, like it was before. Out of the rubbles of Trent Lott’s house — he’s lost his entire house — there’s going to be a fantastic house. And I’m looking forward to sitting on the porch.

Bush will have to wait a couple more years before he finds himself sitting on Lott’s porch, sippin’ a virgin mint julep. Even Trent Lott had to join a class action suit to get compensation. And others haven’t fared nearly as well. Many Gulf Coasters have insuree’s remorse: while the uninsured had no alternative but to rebuild, those with coverage have been living a life in suspension, cramped in FEMA trailers, hoping that the money will come. 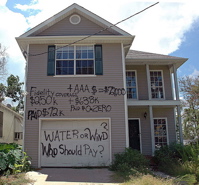 Yet is it really fair to ask the insurance industry to bear the entire burden of an actuarial apocalypse? Has it been burned beyond recovery by global warming and the climatic chaos that has spawned El Nino, La Nina and their destructive progeny? How do we deliver justice to a region that just feels deserted?

What happened to the days when paying a monthly premium bought security? Should there be a federal compensation fund like the one for the victims of 9/11? What is our moral responsibility to citizens whose lives have been undone?

Author of Edge City and, most recently, Radical Evolution

Joel Garreau, A Dream Blown Away, The Washington Post, December 2, 2006: “The big problem with climate change for the insurance companies is not the risk. Their whole business is getting paid to accept risks. The trouble is that their traditional means of calculating what is an acceptable risk — and how much to charge for it — is based on history.”

Joel Makower, Climate Change: ‘Adapt or Bust’, Marketing & Strategy Innovation Blog, June 25, 2006: “‘The insurance industry must now seize the opportunity to make a difference, not just to the future of our own industry, but to the future of society.'”

Rebecca Mowbray, Elevation Catch-22 hits homeowners, The Times-Picayune, February 11, 2007: “Fitzpatrick is trapped in a post-Katrina insurance conundrum that could affect thousands of people in south Louisiana if other insurance companies have rules similar to those at Allstate. Fitzpatrick is required to elevate his home to maintain flood insurance coverage, but if he elevates he won’t be able to maintain a private homeowners insurance policy. ”

Michael Homan, Allstate Denies a Claim We Never Made, Michael Homan, August 8, 2006: “They are denying our claim that the flood waters damaged our foundation. Fine. We never made that claim to begin with. If Allstate would like to deny paying us for giant Santa Clause dolls made out of gold on our chimnees they are free to do that as well.”

Michael Kunzelman, Sisters Blew Whistle on Katrina, The Washington Post, August 26, 2006: “The sisters, who managed teams of State Farm adjusters, say the documents show that the insurer defrauded policyholders by manipulating engineers’ reports so that claims could be denied.”

Leslie Eaton, Vacuum Maker Hailed as Savior Quits Gulf Town, The New York Times [Select], January 15, 2007: “The company says it cannot get enough insurance to cover its plant here, and cannot hire enough skilled workers to replace those who never returned after the storm, mostly because they had nowhere to live.”

In 2006, the markets began deciding who’s going to pay for climate change. And the answer, basically, is us. At least those of us who live in the path of big, bad storms. We’re either going to pay through higher taxes or higher insurance premiums, but either way it’s getting markedly more expensive to live near a coast. And not just from Texas to Florida, but also from Georgia to Maine. And it’s the Georgia to Maine part that really interests me. Because that’s the area that people really haven’t wrapped their minds around. But in 2006 the insurance industry got religion about just how vulnerable places are.

My wife called my insurance company . . . and they said, “Oh no, this isn’t covered, at all! You don’t get anything!” Now, I went to law school, so I said, “let’s talk to her supervisor.” But think of all the people in New Orleans, all the working class folks who maybe just took that and said, “Oh, I just don’t have a claim.” . . . The rationale was, “it’s just a flood story. It’s a flood story, so we don’t have to pay, we’re the wind carrier.” And actually, our roof was blown off. And they knew this, and they just tried to drive people away.

It was like being in a place where a neutron bomb had been activated, or some kind of a science fiction movie. Nobody around, incredibly silent, no colors, everything was in sepia tones, and no birds – it was just really creepy. We called Allstate every day, and we waited and waited and waited, and we kept being told that clearly the wind made out house lean, but they needed a report from the engineers. So finally, in February, two individuals from a group called Haag Engineering visited our house, and they left after fifteen minutes without asking us any questions. They just told us that they didn’t need our input. Finally, at about eight months after our house was damaged, I received a letter in the mail, a letter from Allstate, claiming that they were going to deny our claim because of the report from Haag Engineering, which said, among other things, that it wasn’t windy enough during Katrina to make a house lean.

There are several instances where either adjusters or engineering firms changed conclusions, and we’ve seen several of those involving State Farm. One in particular is where the first engineer went out there and said, “Well, this damage is a result of wind,” and of course that would be covered, even under these insurance agencies interpretation of the policies. And then a week later, another engineer was sent out, and came back with a different conclusion.

To Rebuild or Not to Rebuild?

24 MB MP3 Joel Garreau wrote a provocative article in the Washington Post that’s lit up the Web and — thanks to Potter, our office. We’re thinking about a rebuilding show...