Katrina Refugees, Live from the Astrodome

Katrina Refugees, Live from the Astrodome

The media descends upon the first bus of refugees to arrive in Houston. [© 2005 Katya Horner, all rights reserved]

Houston received tens of thousands of refugees escaping the hurricane and the ravaged city of New Orleans. Many, including those people evacuated from the Superdome, ended up at the Astrodome just southwest of the city, and at the George R. Brown Convention Center in downtown.

Katya Horner, who has been volunteering for the Red Cross and taking pictures of refugees for the past several weeks, lives in the Rice University area of Houston right across the street from the local Red Cross headquarters.

I was working as a Red Cross volunteer the night of August 31st, and I heard the first bus had come in from New Orleans and there were no volunteers to meet it because they weren’t fully staffed yet. They were still in the planning stages and they had just been given permission to use the Astrodome earlier that day. So I ended up going there by myself, and waiting for the rest of my group to come with water and a van full of supplies. I took pictures of the first bus, which a lot of people were calling the “renegade bus.” My understanding is that there was an 18 year old kid, who I would consider a hero, who wired a bus that was just sitting there and brought the entire group of kids to Houston. 85% of the people on that bus were high school aged or younger. 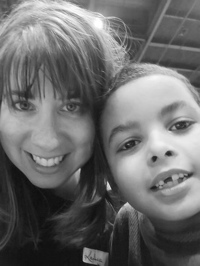 One of the refugees Katya met at George R. Brown was 7 year old Marcel Watkins. He arrived with his grandmother, Velma, but without his mother, who was missing. “We immediately became attached, and spent several hours a day with each other,” Katya says. “That’s the way i like to volunteer.”

He was a very smiley kid. He had this stuffed animal dog they had given him when he arrived at the Astrodome. He named it She-She, because he said it was pink and fluffy and soft, like a girl. He called it his baby. And because his mother was missing, he was projecting onto She-She all the fears he had about his own mom. So he would say, “There was a storm and there was lots of water and She-she’s mom was in the water.” I didn’t really know what was happening with his mother, but I would find out about his mom that way. I didn’t want to burden his grandmother with questions. But one morning he ran up to me, bawling, and said, “My mom won’t call me!” By this time I was totally attached to him. His grandmother kept saying, he just needs to be patient and mother will call him. By the last day, they found her in Chicago, and Marcel got a free one-way ticket from Continental to go meet up with her. But they hadn’t known where she was up until that point.

Deaf refugees in the Astrodome sign to a reporter. [© 2005 Katya Horner, all rights reserved]

It turns out that the Astrodome was lacking the Voice/TTY machines needed for the deaf community to communicate with relatives and other people of interest to them. Additionally, some of the deaf evacuees were marked as dead because they hadn’t heard their names called out over the loud speaker and such. (Got this particular information second hand from a reporter on the scene.)

Thankfully, CAAG (and possibly others) stepped in and set up a deaf-friendly area in the George R. Brown Convention Center, full with translators, Voice/TTY machines, and advocates. My understanding is that the deaf community in the Astrodome is going to transfer over to the GRB soon. 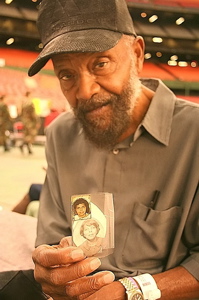 Harold holds up a picture of his late wife. [© 2005 Katya Horner, all rights reserved]

This is Harold. Harold speaks about loss. Not loss as related to Hurricane Katrina, but rather loss as related to normal aging effects. After 57 years of marriage, Harold lost his wife, Louvenia, in 2002. He still keeps many photos of her in his wallet and he still beams when he talks about her.

Harold and Louvenia met when they were twelve years old. Shortly after, World War II broke out and Harold was away in the service for three years. He tells me of his return home, his decision to get suited up in his dress blues, and his proposal to the woman that stole his heart a few years prior. He tells me how she made him stop “boozing” in 1972 and how he’s been clean ever since. He tells me that he hasn’t yet made it to the final “acceptance” stage of grief. He tells me all of this while he sits in the Astrodome waiting to be relocated to his new home.

Click to Listen to the Show (24 MB MP3) In the immediate aftermath of Katrina the story in Houston was the instantaneous and effective combination of public participation, private philanthropy, and...