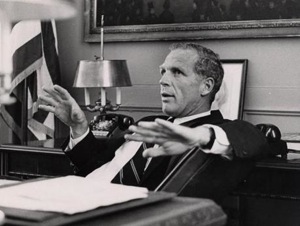 Kevin (from Heaven) White: Footnotes in his Favor

Kevin (from Heaven) White: Footnotes in his Favor Driving past the Roxbury Court House one afternoon in mid-February [1968], Kevin White spotted a large circular crowd in an empty parking lot. “Stop the car; it must be a fight,” he said, pouncing out and pushing his way into the center of the crowd. Two schoolgirls were wrestling on the ground, one astride the other, pummeling her in the face. “This is the Mayor,” White shouted to no avail, “I’m telling you to stop.” Even when he seized the bigger girl’s arm, she kept flailing with the other as he kept saying, “This is the mayor!” Finally she looked up at his face and froze: “Oh, Kevin!” she said. “How was I supposed to know it was you?”

Draft notes for a magazine piece I wrote about Kevin White for the Washington Monthly, 1969.

Ride the Orange Line end to end and share the sense that the Seventies in Boston — the vision and activism of, let’s call it, the Kevin White era — left the city a gift that keeps on giving and seems still vastly under-appreciated. I call it the Benjamin Moore corridor of renovated houses and recycled neighborhoods, of a city saved from the skids in the nick of time — not least by the fight to block US Rte 95 from the city and to rebuild transit instead. Toward Oak Grove in Malden, the Orange Line rider next to you is more likely to be Asian-American; closer to Forest Hills, on the far edge of Jamaica Plain, probably African-American.

Night and day all the way, the train is full of fresh actors in an old Boston cast of high school students, church folk reading Bibles, musicians with their axe cases, restaurant workers still in uniform, cops, secretaries, lawyers with attache cases, Red Sox hats, Bruins jerseys, me, you, no look-alikes, nobody reading the same book or newspaper. I’m the only one who remembers Bill Bulger’s St. Patrick’s Day crack from the early 80’s: “Get on the Orange Line with a golden chain; get off with a Purple Heart.” Actually the old elevated version felt worse in my boyhood when my brothers and other Roxbury Latin School geeks worried about the white toughs with ducks ass do’s around Egleston Square and the Dudley Street Station. But nowadays on the Orange Line, everybody’s busy, everybody’s comfortable.

I’m just reminding myself: it didn’t have to be that way.

A week after Kevin White’s funeral, three impressions are still coming clear to me: first, Boston was closer to the ragged edge, socially and infrastructurally, than we knew at the time, and that if Louise Day (“You know where I stand…”) Hicks had won the mayor’s office in 1967 for the fighting spirit of South Boston, the city might be as gaunt and vestigial as Detroit is today; second, that Kevin White had more scope, purpose and overall integrity than friends like me understood; and third, that our aspirations in journalism to perspective and judgment of character are pretty feeble at best. But we do keep our notes!

White swings unpredictably from mood to mood. What gets him down is not fear of the city’s social or racial difficulties but the decrepitude of the city’s physical plant (“The sewer system is so old it’s a joke — it could go any day now”), the rigidity of the civil service system and the unavailability of administrative talent, or the antiquity of the city itself (“Sometimes I look around at our housing and decide I ought to lead the militants who want to burn the town to the ground.”)

… When Smokey Robinson and the Miracles sang at the Mayor’s “Summerthing” series of neighborhood festivals in 1968, the city’s amplifying equipment broke down at the Carter Playground concert in Lower Roxbury and a few disappointed teenagers started a looting spree. The community security patrol challenged the police department’s jurisdiction. And older Roxbury leaders said the Mayor had violated a long-standing rule against any mass entertainment or night-time gatherings in the ghetto. But Kevin White spoke of the summer’s first incident with something close to exhilaration. “Of course the sound system was our fault,” he said immediately afterward. “But it won’t happen again, and I think people know we were trying. I was walking around Carter Playground by myself all evening and I talked with an awful lot of people. I know that the mood of that crowd was good — really good — no matter what a few kids did. We’re going to try again…”

… Earlier on the same night, Smokey and the Miracles sang on Columbus Park, a vast open field on the edge of Boston Harbor, between Irish South Boston and the largely Negro Columbia Point housing project. Smokey’s audience was big and thoroughly mixed. Milling about alone, White leaned over at one point to an Irish old-timer who was tapping her foot and smiling at the blues. “You’re just a kid,” said the mayor. “My musical taste stopped developing about the time of Bing Crosby and ‘White Christmas,’ but you’re still with it.”

… on himself at age 39: “Every ambitious man approaches a critical point around 40, when he discovers whether or not he really has what it takes to go all the way. I know now, in myself, that I have it. I may never go any further than Mayor of Boston, but I know today that I have everything it takes to be governor, or president. I’m good at my business. There aren’t ten politicians in America who are as good at their jobs as I am.”

… of Boston’s New City Hall, of which Kevin White was not the builder but the first occupant: Wolf von Eckhardt of the Washington Post had called it the most most important public building — anywhere — of the 20th Century; others mocked it as “some sort of Sumerian temple.” Kevin White told me: “That massive use of concrete isn’t my idea of pure beauty, but I’m coming around… On the outside it suggests a fortress; on the inside it’s a maze, an intricate puzzle. You could get to Hitler at Berchtesgaden quicker than you could get to the mayor inside the New City Hall. I have to walk around corridors, in and out of hidden elevators and through secret passageways for about 20 minutes to get from my office to the public outside, and anybody knows that’s not my taste… I think it’s a handsome building.”

… on John Lindsay, then mayor of New York. “There’s no one I admire more in public life… Is there anyone anywhere that doubts that John Lindsay works his job, that he’s a good man, that he gives every ounce of himself for New York? Yet he’s in terrible trouble. My own instinct is that he’s going to be alright, but nonetheless… One of the hard things to learn in politics is that there is always going to be a day of reckoning, the inexorable day when it can all be taken away from you… It’s a tough, tough business, and the end of the road is almost inevitably defeat.”

… on being a mayor: “It’s having to deal with a thousand unrelated pieces of junk. It’s as if somebody came into your office on a Monday morning and dumped a wastebasket on your desk — and then said, on the way out, ‘I’ll be back every morning this week with a new load.’ The cities are exposed to the heaviest public demands but have the least power to solve real problems.

… on his city: “There’s life in the neighborhoods. I’m really very hopeful.”

Draft notes for the same magazine piece that nobody read and I scarcely believed, 1969.