You can’t have a full, fresh start after you’ve been the top of the heap, and the heap has kind of imploded in part and you’re building it up again. But it’s clear that once a country goes through one of these ringers, and its role changes, that a lot of constructive things can happen. … It’s never a total set of problems, there’s always some good side to it. But economically, it’s usually a wringer. 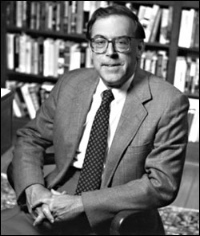 Following up on yesterday’s Last Throes of Neoconservatism show with Francis Fukuyama and Niall Fergusson, a dissection of our missteps as a “benevolent hegemon” overseas — our empire, as Fergusson insists we call it — we’re turning our attention back to our own shores with Kevin Phillips and his American Theocracy.

Phillips has a simple but far-reaching thesis: that our country is addicted to oil, God, and debt, and that this unholy trinity will be the end of us. “These developments have warped the Republican Party and its electoral coalition, muted Democratic voices, and become a gathering threat to America’s future,” he writes. (And warped them enough, it’s fair to say, that the former senior strategist for Nixon’s 1968 campaign and author of The Emerging Republican Majority is, as of 2002, no longer a registered Republican.)

His reading comes as much from history — of Rome and Imperial Spain, of the Dutch and the Brits — as from the careful eye on U.S. electoral shifts and trends that brought him to the Nixon administration in the first place. But even with its historical references and outwardly sober style, this is a five-alarm call.

So step right up, Open Sourcers, with water or with fuel: what do you want to know from Kevin Phillips? For starters, do you buy his thesis? Do you see a connection between petrol addiction, stratospheric borrowing, and a belief in (or prayer for) Armageddon? Do you have your own empire-crumbling trinity?

Author, American Theocracy and American Dynasty, among many others

Author, Among Empires: American Ascendancy and its Predecessors

24 MB MP3 The Republican Party in Washington DC today are the sort of people we went into politics to run out of town. … We have become what we opposed....

Kevin Phillips: how bad is it really? People I know count on Paul Krugman in The Times to give us all the bad news we can believe in. But Kevin...