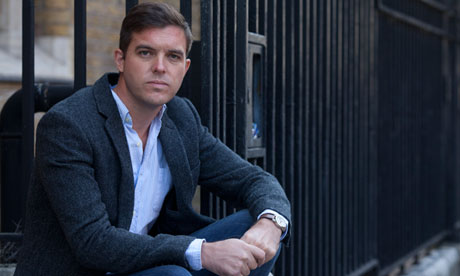 In my own experience I had moments of lucidity when I recognized what was happening to me. And I recognized ways in which my own moral center was being knocked out of alignment… We were on a patrol once, dismounting our vehicles. I was pulling security on a ridge line near Mosul, and I realized that in fact we were on the walls of ancient Nineveh. And something about that recognition was so alarming to me — that we were in this place that was, really, in the Cradle of Civilization. What are we doing here? Why am I here? I mean, knowing that my job as a soldier was to kill people. Ultimately, if you’re wearing the uniform, if you’re carrying a weapon, that’s what your job comes down to. And it was so staggering to me in that moment. But then that moment passed, and moments like that would come and go.

Novelist Kevin Powers, of The Yellow Birds, with Chris Lydon in Boston, March 2013

Kevin Powers is being credited with the first literary masterpiece of the war in Iraq. My question in our conversation is why, like so many horrifying war masterpieces since the Iliad, The Yellow Birds leaves us feeling so helpless to fight the next onset of the madness.

Drawing on Kevin Powers’ life as a teen-age Army volunteer from Richmond, Va and a year’s duty as a machine-gunner near Mosul, The Yellow Birds is an absorbingly double-edged book. One very short form might be: Yes, the war was as cruel and criminal a mission as we all knew in our guts it had to be — young kids scared out of their wits 24/7, asking what the f*** are we doing here? The Yellow Birds is a consuming observation of breakdowns — of fraternity and loyalty, discipline and sanity; but it leaves no doubt that the general collapse began in a cloud of delusion and oblivion on the home front. Dave Eggers calls it a “gorgeous novel” and “easily the saddest book I’ve read in many years. But sad in an important way.”

Both the sadness and the significance of it affirm the great wisdom of William James. “Showing war’s irrationality and horror is of no effect” on modern man, as James wrote in The Moral Equivalent of War. “The horrors make the fascination. War is the strong life; it is life in extremis; war taxes are the only ones men never hesitate to pay, as the budgets of all nations show us…”

A commenter on the Guardian website made James’ point more pointedly about this very book that everyone (me, too) finds “beautiful,” this winner of the Guardian’s First Book Award. “Kevin Powers’ novel is part of the war industry,” wrote “fan64”. “None of this beauty and fascination would be possible without the warmongers we pretend to hate — oh, and the voters who elect them and become their war consumers…”

Oh, and us readers as well. As I confessed to Kevin Powers, The Yellow Birds is a marvelous accomplishment that made me feel sick. 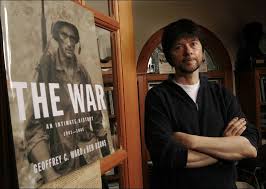 William James: the mind of Pragmatism …modern man inherits all the innate pugnacity and all the love of glory of his ancestors. Showing war’s irrationality and horror is of no effect...