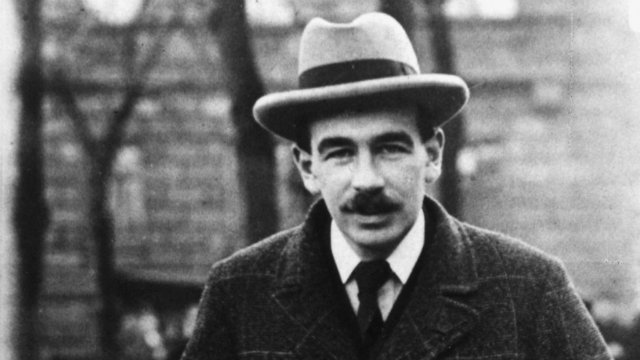 What would the 20th century's greatest economist have to say about the 21st?

What Would Keynes Do?

This election has been about everything but the economy, stupid (according to John Harwood of The New York Times). Americans are split right down the middle—48 to 48—on which candidate will handle money matters better; instead the wedge issues are tolerance, territory, immigration, constitutional rights, political (and factual) correctness. Why is that?

There are a lot of theories bouncing around this week, and we imagine them all overlooked by John Maynard Keynes, the economic wizard behind the Bretton Woods world order and the boom years between 1930 and 1970. He may have been the last genius of economics who also understood human life, in all its excesses and “animal spirits.” What would his keen mind have brought to a moment with so much ambiguity?

Harwood argued last Thursday that the lukewarm economy gives neither side an advantage: the Obama recovery was neither strong enough to gloat over nor weak enough to attack.

But early this week, a Census survey of economic indicators revealed that in fact, 2015 looked like a historic uptick: median household income rose 5.2%, the biggest jump since 1967. 3.5 million Americans climbed out of poverty; unemployment dropped to 4.9%, half its post-crash high. All three stock indexes have hit record highs, and more than half of Americans say the economy seems “good”—there’s genuine relief in the air.

2. But we’re still a long way from “morning in America.”

Yet 60% of Americans still think the country’s headed in the wrong direction. The median wage may be up this year, but it’s still below its balmy 1999 high. The body is recovering, but the collective psychology is still anxious and depressed. When people look in their wallets—or toward their futures—they feel shortchanged and blame Washington.

Our guest, the protest journalist Sarah Jaffe, calls attention to the people who are really still feeling the squeeze—of anti-Keynesian austerity and casino capitalism, for example—in her new book, Necessary Trouble. It’s a chronicle of people on the march against punitive student debt, foreclosures, and slashed public budgets—and for moving the conversation forward.

3. Growth may be ending.

Heavy-hitting economists like Larry Summers have started to worry aloud about “secular stagnation”: a period in which growth itself may slow—or stop—in our Energizer-bunny economy. What would that mean for the American dream, which depends on rising wages buying more and better goods at cheaper prices?

4. But our minds are changing, too.

A radical shift that the new bipartisan consensus emerging in the candidates: that signing onto NAFTA, letting infrastructure languish, and cutting spending was a mistake—in short, that the government still has a stimulating role to play in the American economy.

To make the case, our good friend Mark Blyth—the Brown University political economist whose magisterial book Austerity: The History of a Dangerous Idea lowered the hammer on the false promise of cut budgets. Mike Konczal, one of the big-thinking financial reformers and fellows at the Roosevelt Institute, will make the case that this fraught election might be concealing a new and healthy economic consensus.

Finally, Lord Robert Skidelsky paints us a portrait of Keynes himself, as a cosmopolitan elite who nonetheless empathized with those out of work and on the dole. Keynes is the kind of economist we wish we still had around, offering not only timely economic prescriptions (extend global financial regulation, double down on government infrastructure spending, experiment with basic income plans), but also a model—of a holistic, cross-disciplinary, concerned mind:

The master-economist must possess a rare combination of gifts …. He must be mathematician, historian, statesman, philosopher—in some degree. He must understand symbols and speak in words. He must contemplate the particular, in terms of the general, and touch abstract and concrete in the same flight of thought. He must study the present in the light of the past for the purposes of the future. No part of man’s nature or his institutions must be entirely outside his regard. He must be purposeful and disinterested in a simultaneous mood, as aloof and incorruptible as an artist, yet sometimes as near to earth as a politician.

Mark Blyth, of Austerity fame and the Watson Institute, has a Scot’s vernacular gift for clarifying economics. Is the situation explosive? “You’ve got 300 million Americans and 500 million...