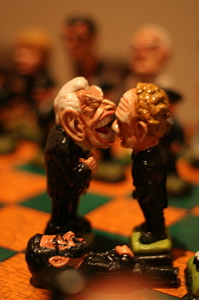 On May 8th, Ian Paisley and Martin McGuinness — two men who were once the bitterest of enemies — entered into a power-sharing agreement as leader and deputy leader of Northern Ireland’s executive government. Paisley is head of the Democratic Unionists, Northern Ireland’s largest Protestant political party, and McGuinness is former head of the IRA. These two men sitting across a table from each other would have been almost unthinkable twenty-five years ago.

After so many years of violence, what went right in Northern Ireland? And are there relevant lessons from the Northern Ireland peace process for other conflicts around the world: in Iraq, Afghanistan, or Palestine?

Boston Globe columnist James Carroll tries to tease out the factors that allowed peace to come to the region; British MP Peter Hain argues that the successful peace process should offer hope and inspiration to other sectarian conflicts; and General Petraeus soothes those impatient with Iraq by pointing out that time was critical to the successful resolution in Northern Ireland.

Then again, perhaps this is all wishful thinking, because situations in other parts of the world may be too different for Northern Ireland’s example to be useful in a practical way. Is it possible to extract specific strategies from the region, or only broad ideas, such as that it’s a good idea to negotiate with your enemies? And as one blogger points out, if General Petraeus compares Iraq to a conflict that has by some accounts gone on for 800 years, is that really such a good thing?

So far, we’ve talked to Irish blogger Mick Fealty and Israeli military historian Martin van Creveld. Who would you like to hear from, and how do you think Northern Ireland might work as a model for other world conflicts?

Author, After Jihad: America and the Struggle for Islamic Democracy and What We Owe Iraq: War and the Ethics of Nation Building

Tom Mitchell, Irish Lessons, The Conversation, Mar 28, 2007: “Does the [Northern Ireland] agreement mean that Kadima or even the Likud is likely to reach a peace agreement with Hamas? For several reasons, I fear that the answer is ‘no’.”

Malachi O’Doherty, Lessons from Northern Ireland, Comment is Free, May 8, 2007: “…what are the lessons to be learnt from the coming together of Ian Paisley and Martin McGuinness? The first, surely, is that even the most outrageous political ideologue may be willing to compromise principle for power.”

Still Burning, The Peace Wall, Flickr: “In the heart of Belfast stands a wall, 25 feet high. It consists of iron, brick, and steel sheets, and it is called the Belfast Peace Wall. It was built to keep Catholic and Protestant neighborhoods seperated – extra high so no stones or petrol bombs could be thrown over it. It is also a stop on every single tourist tour of Belfast, and most people scribble messages of hope and peace on his hideous wall. I have attempted to document these messages.”