The media in Europe seem to say that France is always difficult to reform. That France is blocked on its own system. But my thought is that those protests are not only linked to the CPE bill. I believe they reveal something more profound: Maybe a generation gap between our political staff and the citizens.

Cars burned in Paris again; students and labor unions in France were in the streets this week to protest the First Employment Contract, or CPE, which would create a two-year limited contract with workers under 26. The outrage is hard to process — looking at France from our own labor market — so we found ourselves some bloggers.

Everyone seems to be taking the the streets, led by the student groups and the (very powerful) syndicates, which are essentially labor unions. The people at the demonstrations are reflective of a good portion of French society. I haven’t talked to a single person who thinks the CPE is a good idea. 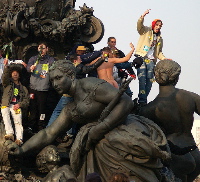 “A protester in Place de la Nation’s main statue is mooning the crowd, imitating the statue below representing the Republic” [Hugo*/Flickr] 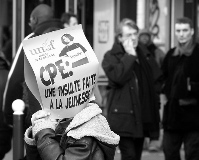 “CPE: An Insult to Youth” [Hugo*/Flickr]

The goals differs with the groups concerned. Student and “lycéens” want the bill not to be enforced, while some in the political opposition asks for the goverment to resign. Not all protesters know precisly what is in the bill. It shows that, in my opinion, the anger is more diffuse. Some speak of a “regime” crisis. As if our political institution wasnt able to cope with this general miscontent. Other even speak of May, 1968, even if I dont beleive we are there yet… 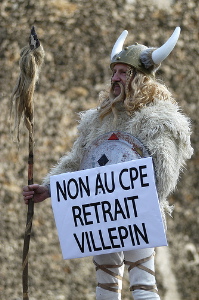 The first obvious link [to the November 2005 riots] is that those who commited those riots in the suburbs joined (and sometimes attacked) the protesters. The second link could be found in the general miscontent of the French soceity, the general frustration with our political system, which is unable to deal with the situation (unemployment mainly, integration of immigration). 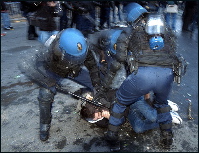 The emotion is very strong in France and the demonstrations are increasingly violent. The degradation of the social climate involves the reappearance of violences of the suburbs of November 2005 and one sees breakers benefitting from the disorder to make offences are not political.

Nobody knows today how the government, which shows great firmness, will be able to leave this crisis. The youth who have already lost a lot of school time seem ready to continue these increasingly violent actions.