Second Life transcends a lot of social barriers that we have in real life. … There are so many immediate social stigmas that we have with each other that just sort of disappear in Second Life, because everybody is sort of on a level playing field. … We’re talking about all the things in real life that, whether we like to admit it or not, separate us, that are barriers to friendships. 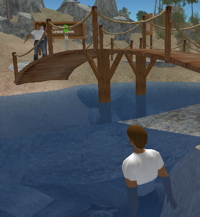 Strangely, when I got back out my jeans were immediately dry again. [Brendan Greeley]

This is me, in Second Life. I have excellent hair, nice lats and I have fallen into the water. There are people on the other side of the bridge, there. I did not talk to them. I was busy trying to get out of the water.

Luckily, in Second Life, you can fly. You can also don the body of your choice; mine happens to be the default, but I’m rather fond of it and thinking of keeping it. More in keeping with the laws of physics, you can buy property, go to a club and make your own clothing.

Second Life is not a game; it’s a world. You log in and then you see a representation of yourself — your “avatar” — moving around in a representation of physical space. You can see other avatars moving around, too, each controlled by some other real person sitting at a computer in Los Angeles or Qatar or Seoul or anywhere in the world with a broadband Internet connection.

There is no point or, rather, that there is no point is the point. Your avatar is free to wander around or go to parties with other avatars. You can purchase real estate from Linden Labs, the company that designed Second Life; on your property you can build a club, hire an avatar to play music and collect admission in Linden dollars. You can spend those dollars on more real estate, or you can exchange them — at a free-floating rate, depending on the size of the Second Life economy — for US dollars.

The avatar you see above — me, in Second Life — marks me immediately as a newbie. I haven’t take the time to customize him yet; I haven’t spent any money on clothing. I cannot move with ease. I do not own property. I am an immigrant; my uncomfortably tight jeans and t-shirt mark me as surely as a pair of peat-blackened hands would have a century ago stepping onto a dock in New York. From Linden Labs CEO Philip Rosedale:

Standing at the welcome area and watching newbies I am struck by the image of an traveller emerging from Grand Central Station with no more than a compass, a frayed subway map, and $1 in their pocket – tasked with discovering what is out there.

Philip’s Blog, Country or Platform or Both?

Once you have your bearings, you can leap into complications possibly familiar to you from first life, that is, of the real world. You can take part in a mass wedding. You can engage an escort service. You can show up on the police blotter. You can found a socialist mini-state. Or perhaps — less familiar from first life — you can see how people react when you change your race.

Second Life boasts 150,000 avatars, more residents than the US Virgin Islands. What’s the appeal of online worlds like Second Life or World of Warcraft? These worlds are an economist’s or sociologist’s dream; what are we learning from them about first life? To quote Second Life’s CEO, are they countries or platforms or both?

And do any of you live in Second Life? Want to give me a tour?

Ok, so David and Mary were concerned that it might not be clear that this is a show, not a blog-only feature. It is a show. And while we’re at it, should these people be going to real bars? If people are making friends and money through their avatars, what’s going missing?

Second Life Herald, a blog about the legal, economic and social implications of life in the virtual world.

TheStoryofDigitalIdentity, a podcast about virtual-world identity.

Gitr’s WoW Blog, maintained by “a human warrior on the Kargath server.”

Neal Stephenson Snow Crash, a 1992 novel, often used as reference, that predicted much of the structure of online worlds

The internet is aflame. Orthodox Jews and fundamentalist Christians, wiccans and pagans, everyone is talking about God. So how has our notion of God changed since people started searching for...