Consider his sources… cited in the current New Yorker piece on the “The Redirection” of Bush administration policy in the Middle East:

There’s Prince Bandar, for 20-plus years the Saudi Ambassador to Washington and Bush family intimate who heard the war decision on Iraq before Colin Powell did. There’s Sheik Hassan Nasrallah, the Hezbollah chieftain Hersh interviewed in Beirut. Also: Walid Jumblatt, the anti-Nasrallah, anti-Syrian chief of the Druze minority in Lebanon. Also in Lebanon, Alistair Crooke (if that’s his real name), 30 years with British intelligence in MI6. And then the Americans: Richard Armitage, Colin Powell’s right hand at the State Department. Robert Baer, the CIA adventurer who wrote “See No Evil” and lived the life of George Clooney’s character in the movie “Syriana.” Martin Indyk, Bill Clinton’s Ambassador to Israel. And Les Gelb, Hersh’s (and my) onetime colleague at the New York Times who became president of the Council on Foreign Relations. Not to mention the several sources Hersh doesn’t cite by name: the “US government consultant with close ties to Israel,” the “former senior US intelligence official,” the “Pentagon consultant.” 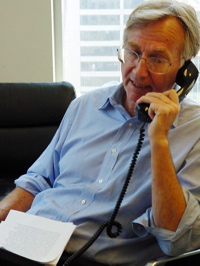 Reading Sy Hersh always feels like making the rounds of the A-list of deep-throated and richly pollinated gossips, with the quickest of the giant hummingbirds in journalism. We are engaging him for an hour tonight on his latest in a long series of New Yorker reports anticipating a Bush attack on Iran.

The “redirection” he outlines in the current piece sounds actually like a massive correction, and a return to familiar old grooves of alignment after the misbegotten Iraq war which empowered all those Shia Moslems and scared our old Sunni pals, especially in Saudi Arabia. A new set of games and war-games is underway. It must be Prince Bandar whom Hersh is quoting here: “We have two nightmares: For Iran to acquire the bomb, and for the United States to attack Iran. I’d rather the Israeli’s bomb the Iranians, so we can blame them. If America does it, we will be blamed.”

This morning’s news puts a fresh and contradictory top on Hersh’s latest. The New York Times says that Bush diplomats will sit down after all with both Iran and Syria, to talk at least about Iraq. Is this the new game, or more of the old gamesmanship? Sy Hersh will know, and he might just tell us how he knows.

Seymour M. Hersh, The Redirection, The New Yorker, February 25, 2007: “Nasr compared the current situation to the period in which Al Qaeda first emerged… This time, the U.S. government consultant told me, Bandar and other Saudis have assured the White House that ‘they will keep a very close eye on the religious fundamentalists.'”

Richard A. Oppel Jr., Iran to Take Part in Iraq Security Conference, The New York Times, February 28, 2007: “The willingness of American officials to attend the March 10 security conference along with Syrian and Iranian officials has been widely seen as reflecting a decision by the Bush administration to yield to critics who have argued that it should no longer avoid high-level contacts with Tehran. But Bush officials insist that their policy has not changed.”

George Lakoff, The Words None Dare Say: Nuclear War, The Huffington Post, February 27, 2007: “We do not believe that most Americans want to start a nuclear war or to impose nation destruction on the people of Iran. They might, though, be willing to support a tit-for-tat “surgical” “attack” on Natanz in retaliation for small canister bombs and to end Iran’s early nuclear capacity.”

Lebanon PM Denies Any Involvement in U.S. Covert Operations, Ya Libnan, February 26, 2007: “The New Yorker report “is baseless … It fully contradicts with the policy and practices of the Lebanese government,” a short statement said.”

Joe Gandelman, Is U.S. Involvement In Iraq Talks With Iran A Significant Policy Shift?, The Moderate Voice, February 8, 2007: “There are several ways of looking at this. One way, is that it’s a policy shift cocooned in the face-saving device of not quite being an about-face: the U.S. will be there, but didn’t call the conference.”

My instinct is that this president has no interest in serious negotiations with either Iran, Syria, or any of the other people he should be talking to, in particular Hezbollah, and he’s not going to do it.

Certainly in Iraq, although there were always tensions between Sunni and Shia, the notion that you had this kind of sectarian warfare, that you could ever get into this kind of bloodletting between the two groups — they intermarried; it’s a tribal society basically; many of the tribes had fifty-fifty Sunni and Shia — there was never an issue like it is now. And of course now it’s a struggle to the death.

What happened is, because of Saudi pressure, we agreed that we would have to do something about Palestine. There would have to be some pressure to resolve that crisis. That was a big demand of the Saudis as part of the deal. And as you know, a few weeks ago, they did consummate an agreement, a tenuous agreement, between Hamas and Fatah in Mecca.

As you know, since the end of the war, Nasrallah, there have been opinion polls showing that not only in the Shiite world, but also in the Sunni world, in the Sunni street, he is the most popular figure in the Middle East, and probably the most influential. And so, the idea that fellow Arabs would be going against him was fascinating.

In Pashtun society, when we first started the war in Afghanistan, I went to some people who really knew the Taliban well… and I asked, what do I need to know, and they said: the one thing you need to know about the Taliban is revenge can come in two or three generations. You guys have no idea what you’ve kicked over. You can get the son of the son, and perfectly be justified twenty years later. We’re dealing with cultures and societies we don’t know.

When Bush starts talking about Iran being responsible for the deaths of Americans inside Iraq, that’s interesting language to me and a lot of my friends, because that suggests that we can invoke Article 51 of the [United Nations Charter] in self defense. That suggests that if Americans are getting killed, we can respond.

Maliki’s game seems to be just keep on stomping on the Sunnis… they love for us to go after the Sunnis because we’re doing their job for them. It’s complete utter madness.

Click to Listen to the Show (24 MB MP3) [PhotoLuna 25 / Flickr] Seymour Hersh got most of this war’s scoops, and now he says there’s talk of — active planning and...