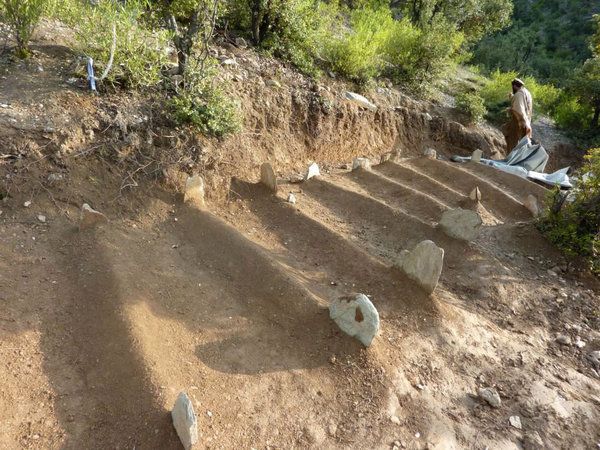 Graves of some of the 12 children killed this month by a CIA airstrike in Kunar Province in Eastern Afghanistan. Meer Afzal’s photo for the European Pressphoto Agency appeared in the New York Times on April 19, 2013.

Boston has had a close look at a diabolical parody of the US drone war in Pakistan, Afghanistan, Yemen and elsewhere. The radio audience talking with us here doesn’t miss some unmistakable resemblances. It’s not about cause and effect. It’s about human horror at sudden death and dismemberment. It’s about innocent victims. It’s about our own frenzy of anger at a sneak attack on a high civic holy day. In Boston it seemed to come from nowhere; we still don’t know the whys and wherefores. It’s different over there: people know exactly where these things come from. They have the USA and presidential policy written all over them. And in just the Obama years they’ve become a signature of how we deal with the world we fear.

A Yemeni witness before Senator Durbin’s review of the drone war testified last week that the people he grew up with “fear that their home or a neighbor’s home could be bombed at any time by a U. S. drone.” What insurgents couldn’t accomplish, he said, a single drone had done “in an instant: there is now an intense anger and growing hatred of America.” “And our hearts are broken for 8-year-old Martin Richard, with his big smile and bright eyes. His last hours were as perfect as an 8-year-old boy could hope for, with his family, eating ice cream at a sporting event.” President Obama in Boston, April 19, 2013

On the day of the climactic man-hunt in Boston, the New York Times had a surveillance shot of the Tsarnaev brothers on page one. On page four of the same paper the Times had a clear account of a CIA airstrike in Afghanistan this month that killed 17 civilians, 12 of them children, with a picture of fresh graves in a row of little mounds — twelve Afghan kids whose names we’ll never know, whose parents and families and villages suffer the same convulsive grief that Boston has been feeling.

President Obama’s memorial speech in Boston struck many of the right notes in a theme of recovery. “You will run again,” he said. What the President pushed into deeper eclipse is that these diabolical attacks, as at the Marathon, feed on and still promote the sick illogic of “shock and awe” and the drone-war trend, in which President Obama is leading us in just the wrong Orwellian direction. Is it not strange that a man of President Obama’s history, intelligence, and sensibility doesn’t also see and emphasize that other parts of the world are more like than unlike Boston in this: they cannot be daunted or defeated by sudden, insane-making murder? We know they suffer miserably, they remember, they will run and fight again, too.