I’m back after two days of slacking off. Monday I was speaking to a class of business school students and yesterday we were recording a foreign policy debate at Brown University. 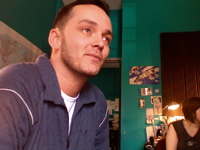 Today we were delighted to have nother visit us. He lives down the block and didn’t even know about

Chris is making calls for a possible show tomorrow on the Murdoch/Wall Street Journal story and the sudden surge of interest in financial news and information. Earlier this week the Canadian company Thomson Financial confirmed that it has approached Reuters about a takeoever. This merger could challenge Bloomberg as the world’s largest provider of financial news. Why the interest now? Is it driving a revaluation of media and newspapers, or is the real story here about digital properties? Chris’ slug for the show is “Let’s Do the Numbers.” David’s is “Let’s Own the Numbers.” We’ve got calls out to John Cassidy who wrote a Murdoch profile in The New Yorker and also Jim Cramer of CNBC. Any other ideas?

Chelsea is researching a show she’s calling a Passion for Ikea. A post will be up soon. Start gathering your Ikea stories.

The Gold Rush for Financial Information

Click to Listen to the Show (24 MB MP3) Is all the personal and political coverage of the Rupert Murdoch story missing the point? To wit: financial information is the...

A critical ROS listener and fan wrote to me this morning saying the timing of last night’s Entertaining Violence show was really bad. He liked the topic and discussion very...