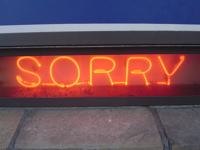 “Love means not ever having to say you’re sorry,” set the tone for the 60s and nearly the next 30 years. What was true for love soon became true for war, and for political scandals and for manmade disasters.

In the 60s the apology, like so much else, went underground. But it seems that the apology is enjoying a revival as a necessary and effective tool in diplomacy and personal relations. In recent years everyone from Bill Clinton to Mel Gibson to Pope Benedict has been eating crow. But are they merely acknowledging their sins of omission and commission with a gussied-up “My bad?” Are their plaints of contrition just a quick and dirty attempt at damage control? 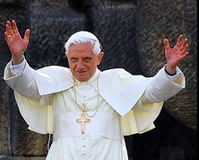 I am deeply sorry for the reactions in some countries to a few passages of my address at the University of Regensburg, which were considered offensive to the sensibility of Muslims. These in fact were a quotation from a medieval text, which do not in any way express my personal thought.

What is a good apology anyway? Is an insincere apology better than nothing? Is late better than never? Does an apology need a cultural context?

We’re hoping to include voices from the Open Source community, and from other realms of the blogosphere, in this show. If you have an apology story please post it on this thread and we’ll consider calling you to record a brief phone conversation, which we’ll play during this broadcast. If you are radio-shy but know someone else whose voice should be heard, please send him/her our way. Thanks.

How to Apoligize, WikiHow: “Decide when and where to apologize. Sometimes immediately after your mistake is best, sometimes not. The sting of a harsh word can be cooled right away with a quick apology, but other offenses might need the other person to cool down before they are willing to even listen to your next sentence.”

Non-apology apology, Wikipedia: “Nobody is sorrier than me that the police officer had to spend his valuable time writing out a parking ticket on my car. Though from my personal standpoint I know for a certainty that the meter had not yet expired, please accept my expression of deep regret at this unfortunate incident.”

Jacob Weisberg, Sorry Excuse: Rules for National Apologies, Slate, April 4, 1998: “Apologies for national failings, both domestic and foreign, are in fashion not just in the United States but also in Britain, Japan, and elsewhere. One reason is that honesty has become less costly since the end of the Cold War.”

Seth Stevenson, Apologies, Slate, July 13, 1997: “When have governments apologized in the past? Which wrongs do or do not warrant apologies? Must apologies be linked to material reparations?”

Aaron Lazare, Apology in Medical Practice, The Journal of the American Medical Association, September 20, 2006: “What sense would it make to admit harm without acknowledging responsibility, offering explanations, expressing remorse, and discussing reparations–all parts of an apology? Without such offerings, most patients in response to such disclosures would more likely be offended than soothed.”

Activism in Memory of Aaron Swartz