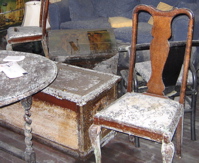 Last night during The Redemption of Michael Brown we read a scrap of dialogue from Jay Forman. Jay, who blogged his evacuation from New Orleans for us here and here, returned to his house to find most of his posessions slimed with a white layer of mold. Predictably (and understandably), he’s less inclined to feel charitable about any version of Michael Brown. He sent us an email this morning after streaming the show from New Orleans last night.

I gotta tell you though, Mike Brown is still a useless [redacted]. The stuff that came to light recently only provided a little video to augment what we already knew. It served simply to reinforce my feelings about Bush; it did nothing to change what I think about Brownie. I have no sympathy. His email transcripts from the crisis say all you need to know about him. In fact he had serious critics in Florida the year before Katrina for the way he managed FEMA then.

The fact/clarification that Bush was told about the specific potential effects of the storm does not change the way Brown managed the disaster. Hell, the National Weather Service said as much in the hours leading up to landfall — I even posted their discussion on your site when we evacuated to Hammond before the power failed. Of course Bush had spoken with Max Mayfield and knew all this was possible.

Brown should be smeared with honey and tossed to the bears for what he did or failed to do. His only value now is as a tool for the left to criticize the administration…

Hi Mike, I just wanted to tell you that, despite the unfair shrapnel that you are taking in the press on behalf of the federal government, I believe you & your...