“Tony Knowles carries a lot of baggage from his prior eight-year term as governor, and there are a whole bunch of Alaskans who will not vote for him no matter what. “ 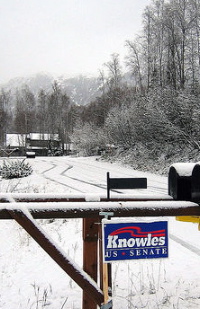 We were looking for photos covering the Alaska Governor’s race today when we found this one on Flickr. We contacted the photographer, expecting a rabid Knowles fan. But Denny Gill of Chugiak, Alaska says he’s had a change of heart since he took the picture. Though he supported Tony Knowles’ bid for Senate in 2004 enough to nail the sign to his mailbox, now that Knowles lost that race and wants reclaim the Governor’s seat (the one he previously held for two terms), Denny can’t get behind him.

[Knowles] comes into the race as a defeated U.S. Senate candidate, and I think he has a few other problems, too: in his television commercials and sound-bites he comes across as too wooden (he’s much more personable and engaging in person), he’s constantly making promises about the gas pipeline that seem totally unrealistic, and we Alaskans may be just a tad too conservative to vote for this, or any, Democrat.

(Note to Tony: what’s up with that deep tan, huh? We Alaskans just don’t go around with tans in September!)

Denny Gill, in a conversation with Open Source, September 29, 2006.

Knowles is not the only ex-governor of Alaska to run into trouble this election cycle. Frank Murkowski, the Republican incumbent and former Senator before that, lost the primary to former Wasilla mayor Sarah Palin. Denny explained why:

“Frank [Murkowski] immediately began sinking in favor with us Alaskans [in his time as governor], not only for hugely unpopular decisions (cutting the longevity bonus, doggedly pursuing a governor’s jet, etc.) but also for appointing his own daughter to fill his unexpired Senate term.”

Denny Gill, in a conversation with Open Source, September 29, 2006.

“Good ridance to Frank: few Alaskans will miss him.”

For more on this race, including the full transcript of this email, visit the 2006 Election Wiki.

Putting the Wiki to Bed

We’re proudly putting the 2006 Election Wiki to bed. The content will remain, but we’ve taken the link down from the sidebar until there’s cause to crank things up again....

We’ve been thinking a lot about the Senate race in Tennessee, but we can’t always make sense of the historical regionalism that shapes party loyalty in the Volunteer state. ...