Michael Haynes is my touchstone of the abiding power and fascination and the profound earthly-heavenly mystery around Martin Luther King Jr. In 1951 Haynes and King broke in together as apprentice preachers at the historic Twelfth Baptist Church in Boston, and they stayed in close touch until King’s assassination 40 years ago, come April 4. Haynes is greatly under-cited in the King biographies, it seems to me. In our conversation Haynes makes a lively, loving witness on Martin, the young Ph.D. student, asking: “Where are the girls that would set my heart on fire,” until the church secretary introduced him to Coretta Scott at the New England Conservatory. But Haynes was also intimately connected with the man who knew, at the end, that his days — maybe his hours — were numbered, and who embraced his destiny in defiance of “longevity,” in submission to God’s will, with an open willingness to lay down his life to cure a cancer on American life. “The highest and deepest and best of the love and sacrifice of Jesus Christ had permeated this man,” Haynes says.

When these two young public theologians met, King, at 22, was the designated heir of an Atlanta church dynasty, just entering doctoral studies at Boston University. Haynes, the son of Barbadian immigrants and the brother of “Charlie Parker’s favorite drummer,” Roy Haynes, was a year and a half older than King and still in seminary. In 1951 he was the minister to youth at Boston’s oldest, most established black church, with Beacon Hill roots back to 1805. Big-league baseball had just been integrated but the black-rights movement was embryonic when Haynes first encountered King, and I’ve often wondered where this pre-civil rights generation got their defining assurance that things could change, things must change. They found it in each other.

He had grown up, Haynes remembers, with a “burning awareness that a cancer was eating at America. I think for any black, North or South — realizing there were strictures, there were limitations, that we’re still being kept out and separated — there was something grossly wrong with that separation, and these walls, these barriers needed to be broken down. I think a lot of young leaders, probably including myself, were waiting for God to appoint a Moses. The time was just right, and Martin was that man who was going to lead us to a promised land… It’s tragic when a body has a cancer and doesn’t know it… Dr. King made that diagnosis very clear to America.”

In 1953 King invited Haynes to join him in ministry and struggle in Montgomery, Alabama, but Haynes stayed in Boston, to win election to the Massachusetts Legislature and to pastor the Twelfth Baptist Church for more than 40 years. For almost half that span, I have been his blessed and grateful parishioner. I make an inadequate note in this conversation that on the enflamed subject of religion in American life these days, the amazing grace of African-American church life is a vastly underrated treasure. The Haynes example at Twelfth Baptist is a Christianity that is Scriptural but not literal; faith-based but never fantastical; community-rooted and bathed in black history and black culture but never provincial or tribal; socially activist but not partisan, much less ideological; moral but not moralistic. Barack Obama in his King Day speech showed himself as an apt child of the church and its preaching tradition. Typical of Haynes’ delicate balances is the line he quotes to me here: “God forbid we should get so heavenly minded that we’re no earthly good.” But on the subject of Dr. King, the special joy of listening to Haynes comes in hearing not balance but the seamless fusion of their spiritual and political imaginations — of radical Christ-centeredness and the nth degree of tough-minded love and courage. 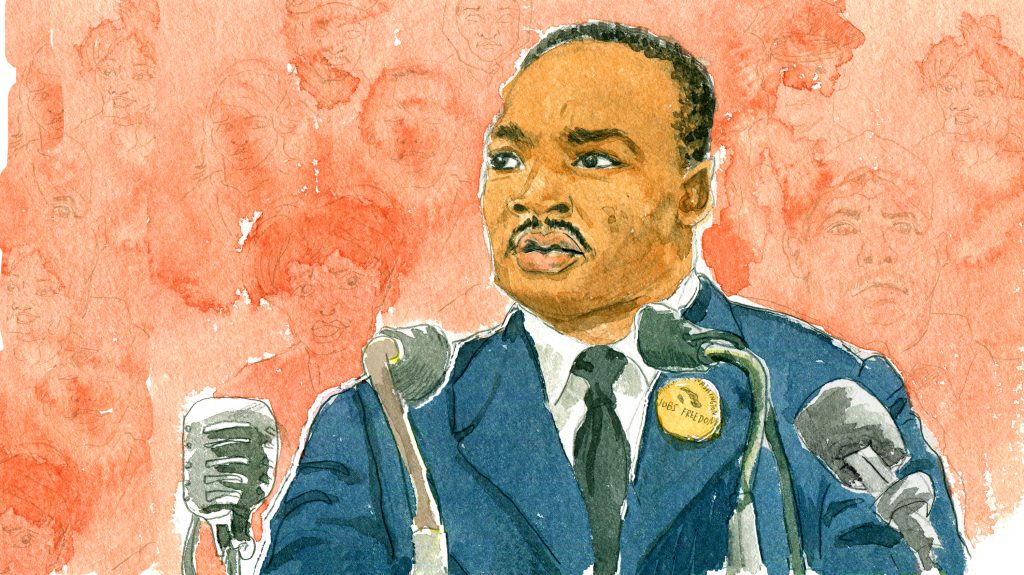 Martin Luther King Jr. comes to seem larger in his absence these last 50 years, himself a cosmos, in Walt Whitman speak, containing multitudes—and not contradictions so much as...