…Right now we only see her murder, but I think she made the biggest sacrifices earlier along the way: she chose work over peer acceptance, family, a normal life.

Somehow the fact that this murder was expected to happen sooner or later made it all the more sad. 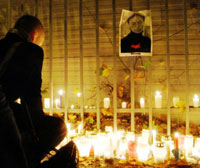 Last night, looking for pictures to accompany our show on Anna Politkovskaya, we found a surprising number of photo sets from from memorials in Finland and Sweden. On the show itself last night, Vilhelm Konnander, a Swedish Russia expert, told us that Politkovskaya was well known — and a best seller — in those countries as a portrayer of Russia; we checked in with some of the photographers to ask about the Nordic connection. Hannah Nikannen, a freelance journalist, went to a candlelight vigil at the Russian embassy in Helsinki. Mark van Gils, a Dutch biomedical engineer, was texted at the last minute to join a vigil in his adopted hometown of Tampere, Finland.

There were way more than a thousand people. I had been expecting for maybe 100 or 150 people to show up, so I was very surprised.

There were about hundred people attending, which is many given the short notice and the fact Tampere is not a very big town, and in Finland in general memorials, demonstrations etc. tend to be rather small scale – this was really an exception in that sense.

Why the mourning in Finland for a Russian journalist?

Finland also has a large part of its border shared with Russia. Having such huge country as Russia (and in the past, Soviet Union) as direct neighbor has had in the past quite many ‘interesting’ implications, and most Finns follow what is going on in Russia probably with a more scrutinizing eye than the average European does. Also, of the foreigners living in Finland the largest group has Russian citizenship.

She came here a lot, had a lot of close friends here, and subsequently she was published a lot. I’ve heard many people who knew her say that coming to Helsinki was like a holiday for her: she could feel safe, and forget all the mud-slinging. She was very well-known, probably much more so than in most other European countries or the US: all of my colleagues knew who she was, and most had heard her speak at least once. …politically it can be frustrating. It’s not like everyone in Kremlin is holding their breath to wait and see what the folks over in Finland think about this.

This morning we were greeted with a post-game analysis of last night’s show on Belarus , courtesy of two of our guests. Dr. Marples was great. Really. The only comment I...