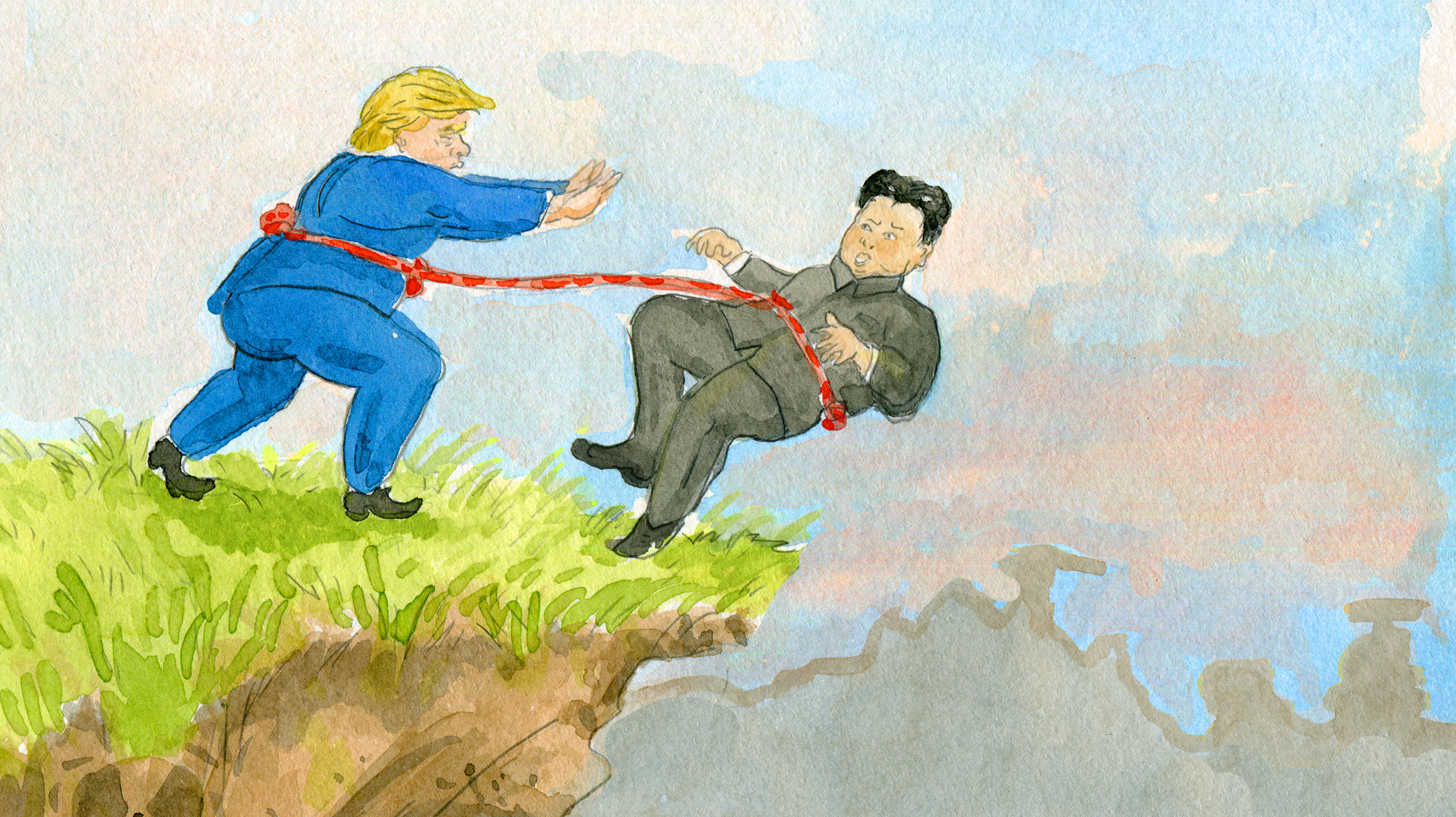 At the brink of who knows what with North Korea, we seem to be back on the scary ledge as in the old Cold War cartoon: enemy rock-climbers hanging off a cliff by the same ropes, ready to fight, though both go down to death if either one slips.  It’s a fog so far of “fire and fury” tweets from our President, threats of “ashes and darkness” for the US from Pyongyang.  We’re on notice that the nuclear age is not over: the age of bottomless anxiety, of crazy-making calculations of the advantage in a first shot, in what could turn to military murder in the millions.  At best it’s a game for so-called ‘rational actors.’ The players we’ve drawn seem to prefer the masks of madmen, but they’re still working well within the pocket of their respective political establishments. It’s already too easy to hear the war drums beating again in Washington as well in Pyongyang. But what if the real problem is that we’re just not asking the right questions? The New Yorker‘s Evan Osnos is working to reframe the issues at hand through his recent on-the-ground report from the sealed city of Pyongyang. What he found there was not a crisis of derangement, but rather, a more deep seated failure of national imaginations: But this psychoanalytic reading of conflict can only get us so far. As the Russian historian Greg Afinogenov reminded us in a recent essay for N+1, “remote diagnoses” of foreign countries and leaders too often obscure the real history of our own imperial follies.

It is American foreign policy doctrine that continues to divide the world into rational actors, typically NATO countries, and irrational ones, typically not long for this world: Saddam Hussein, Muammar Gaddafi, the Kims. In this worldview it is not a set of threats or behaviors that makes a leader a madman—it is the determination to maintain independence from American empire, often through the pursuit of nuclear weapons. In such a framework it is always the advocates of continual pressure, threats, and sanctions that appear the most rational, for they are the ones that maintain vigilance against uncontrollable madmen. A TIME magazine cover from 2002

In studio, Barry Posen gives us the “realist” foreign policy view and helps us game out possible short term solutions to the crisis. On the other end, the nuclear abolitionists Beatrice Fihn and John Carl Baker give us a more utopian view: the vision of a revitalized, 21st century disarmament movement.

Fihn, through her work as executive director of the International Campaign to Abolish Nuclear Weapons (ICAN), hones us in on new demands for prohibition made in front of the UN.

Baker, a research fellow at the Ploughshares Fund, talks about how we can bring these demands back home, building off the momentum of other millennial-led social justice movements.

The 21st century is the time of Standing Rock, Black Lives Matter, and Fight for $15, and it seems likely that a renewed disarmament activism will take a cue from these movements’ confrontational tactics. Today, the dominant style of protest does not passively ask to be heard, but demands it, by actively challenging an injustice at its source. There is of course a long history of peaceful direct action in the disarmament movement, and activists may revive this tradition in the coming years. The US nuclear weapons complex, spread out over multiple sites across the country, certainly provides ample opportunity for disruptive—but peaceful—protest. Thinking intersectionally, though, activists may focus their ire on the defense corporations of the “nuclear enterprise,” who receive billions from the federal government at a time when many Americans feel economically left behind

Shouldn’t we be hearing more from the brave sages who pegged the dangers — even called the outcome — of the Iraq war remarkably, precisely right. This begins a...