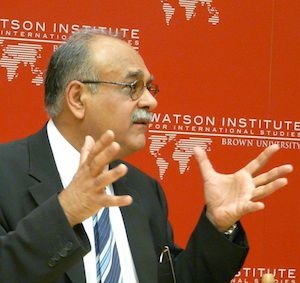 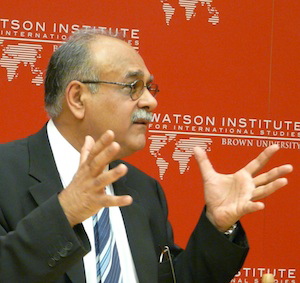 Najam Sethi is the man any of us would want to know in Pakistan. He’s the man we might like — on a very brave day — to be. He’s got the voice of a reasonable Pakistani patriot, also of a free-wheeling American sort of peacenik and liberal. Standard bearer of independent elite journalism in Pakistan, Najam Sethi has been arrested and jailed in the 70, 80s and 90s by Pakistani governments of different stripes. In the last few years he’s had death threats from Taliban thugs, too. Always his “offense” is that gabby critical openness we like about him.

There are people, oddly enough, who call Najam Sethi a stooge for the US and India, but listen here to his denunciation of American ignorance, neglect and hypocrisy; and consider the most appealing case I’ve heard directly for Pakistan’s interest. What Pakistan needs is a friendly “good Taliban” regime in Kabul, Najam Sethi is saying. What it cannot abide is an Islamist trouble-maker, or a foothold for Indian mischief.

I am asking my American question: why not bug out of an Afghanistan war we wouldn’t want to win; and, while we’re at it, end a dysfunctional affair with Pakistan that has produced mainly white-heat anti-Americanism. It’s a thought that doesn’t tempt him — to leave a failing democracy of 180-million people in an anti-American frenzy, with nuclear weapons and a mostly young population. “If you leave that,” he says, “… you ain’t seen nothing yet.” The American exit from Afghanistan will be slow and drawn-out. A good withdrawal will depend on a joint American-Pakistani mission to isolate “good” and “bad” Taliban from “bad” Al Qaeda — and then shoo-ing Al Qaeda out of Afghanistan — dead or in flight to Yemen.

My main concern is not patriotism or nationalism. It’s that Pakistan should not fall victim to imperialist policies by Pakistan’s military or by the Pentagon in the region. I’d like to see a prosperous, safe, secure, secular Pakistan. I’d like to see a rollback of radical political Islam. I think if you don’t give the Pakistani military a certain degree of security, it is capable of adventures in the area ruinous for Pakistan and for the region. I’d like Pakistan to build peace with India. I’d like the Americans to withdraw from Afghanistan. I don’t mind if the Taliban rule Afghanistan. But I would mind very much if they began to export their ideology to Pakistan. I’d certainly like to see the Pakistani military taking its rightful place beneath the civilians, not above the civilians. And I’d like to see the civilians in Pakistan flourish and prosper. The good news here is that civilians now across the board want to redress civil-military relations. They’re not happy with the Pakistan Army’s military adventures in India and Afghanistan. The civilians want to build peace in the region. They want to aid and they want to trade, and they want to build an enlightened country. And I want to be part of that process.