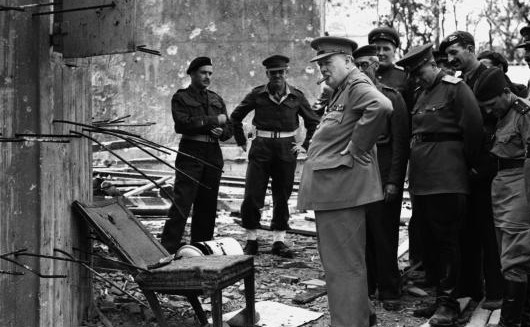 A wing commander in the [British] Royal Air Force [in Iraq], J. A. Chamier, published his views on how best to deal with tribal rebellions.

The commanding officer must choose the most inaccessible village of the most prominent tribe, said Chamier, and attack it with all available aircraft. “The attack with bombs and machine guns must be relentless and unremitting and carried on continuously by day and night, on houses, inhabitants, crops and cattle,” Chamier wrote. “This sounds brutal, I know, but it must be made brutal to start with. The threat alone in the future will prove efficacious if the lesson is once properly learnt.” It was 1921.

Frederick Birchall, Berlin correspondent for The New York Times, published an article about Germany’s preparations for war. It was October 8, 1933.

Birchell quoted from a recent book by Ewald Banse, a teacher at the Technical High School in Brunswick, Germany. The book was called Wehrwissenschaft — “Military Science.” War was no longer a matter of marches and medals, Banse observed: “It is gas and plague. It is tank and aircraft horror. It is baseness and falsehood. It is hunger and poverty.” And because war is so horrible, Banse said, it must be incorporated into the school curriculum and taught as a new and comprehensive science: “The methods and aims of the new science are to create an unshakable belief in the high ethical value of war and to produce in the individual the psychological readiness for sacrifice in the cause of nation and state.”

Neville Chamberlain told the House of Commons that England was officially at war with Germany… It was September 3, 1939.

Churchill’s mood, as he listened, wasn’t sad at all. He felt, he wrote later, a sense of uplifted serenity and a detachment from human affairs. “The glory of Old England, peace-loving and ill-prepared as she was, but instant and fearless at the call of honour, thrilled my being and seemed to lift our fate to those spheres far removed from earthly facts and physical sensation,” he said.

Dorothy Day, the editor of the Catholic Worker, wrote an editorial called “Our Stand.” “As in the Ethiopian war, the Spanish war, the Japanese and Chinese war, the Russian-Finnish war — so in the present war we stand unalterably opposed to the use of war as a means of saving ‘Christianity,’ ‘civilization,’ ‘democracy.'” She urged a nonviolent opposition to injustice and servitude: She called it the Folly of the Cross.

“We are bidden to love God and to love one another,” she wrote. “It is the whole law, it is all of life. Nothing else matters.” It was June 1940.

“This ordeal by fire has, in a certain sense, even exhilarated the manhood and the womanhood of Britain,” [Churchill] said [in a radio speech, seven months into the German Blitz.] It had lifted them above material facts “into that joyous serenity we think belongs to a better world than this.”

“There are less than seventy million malignant Huns — some of whom are curable and others killable,” Churchill said. The population of the British empire and the United States together amounded to some two hundred million. The Allies had more people and made more steel, he said. The Allies would win. It was April 27, 1941.

Some people want to make an issue of method and form around Nicholson Baker’s Human Smoke, subtitled The Beginnings of World War II, the End of Civilization. But the real problem is, of course, his message. In an afterword on almost 500 pages of vignettes, Nick Baker offers his own judgment that the pacifists and other resisters had the right strategic answer to the war-madness of the 20th Century — people like Gandhi, the Quakers, ex-President Herbert Hoover who wanted to break the British food blockade on starving Europe in October, 1941 (“Can you point to one benefit that has been gained from this holocaust?” Hoover asked in a radio speech) and the diarist Howard Schoenfeld, who went to prison in Danbury, CT for standing against the draft and “against war, which I believe to be the greatest evil known to man.”

Human Smoke reads like a wall of Post-It notes — pointilistic dots on a 40-year canvas — which Louis Menand in the New Yorker, for example, says should not be confused with responsible history. I felt it, on the contrary, as a very familiar, virtually cinematic, quick-cutting, frame-shifting, angular and episodic style of story telling. It’s not so unlike the method of Ken Burns’ PBS epic on The War, which took its perspective from GI letters home and family memories today in just four American cities, like Waterbury, Connecticut and Mobile, Alabama.

The difference is that the Burns TV film summoned up and revarnished a lot of old feelings. Baker tears into every bit of received sentiment about the war, and about its heroes — Churchill most especially — in the book and our conversation:

He’s fascinating. He’s brilliant. He had a mind well stocked with poetry… So one doesn’t want to dismantle Churchill in the sense of saying he was not a great man. He has hugeness of personality, but he was a man of many phases… In this period that I’m looking at him, he was really a maniac. He was absolutely intent on widening the war and on getting as many people — his own citizens and other countries — involved as possible. I don’t think I’m being unfair to him. It’s just that if you quote him properly you realize he was just hell bent on this confrontation. As the prime minister of Australia [Robert Menzies] said on first meeting Churchill: “This man is a great hater.” It was so fascinating to watch Menzies’ visit. He first reaction was: “humorless… a great hater.” A few nights later: “he’s a great hater, but he does know an awful lot.” And then, late night, 2:30 or 3 in the morning, he’s up again listening to war stories from Churchill, and he writes, “the man has greatness.” Finally, he’s saying, “the Hun must be taught through his hide!” Menzies is now speaking the language of Churchill. So obviously this man Churchill has an incredible power over other human beings.

Human Smoke is a departure for Nicholson Baker, the high-stylist of The Mezzanine and of Vox, the phone-sex novel that Monica Lewinsky gave to Bill Clinton. He says, “I’ve always liked writing about the things that I hope make life worth living — the reflections on the edge of moving objects, or the little theories you develop when you shoelace breaks… So I tried to use my same approach, my method, in writing about probably the worst 5-year period in human history.”

And yes, Iraq was at the root of it all. Baker conceived the project, he says, “in the run-up to the Iraq war, when the Second World War was repeatedly invoked as the one necessary war. I’ve never really understood the Second World War. It never made sense to me that we had to demolish cities in order to bring a regime down, but I always chalked it up to my own ignorance of history. But if this war is going to be invoked over and over again, then let’s actually look at it. How does it begin? What happened in what order?” And more pointedly: whence came the disastrous doctrines of exemplary war, strategic starvation, bombing and indiscriminate abuse of civilians, that persist in our own long war on Iraq? Baker’s format invites you to put Human Smoke down, annotate it, and keep picking it up. I for one cannot get its arguments out of my head.