Obama and the Boomers

Obama and the Boomers

In the back and forth between Clinton and Gingrich, and in the elections of 2000 and 2004, I sometimes felt as if I were watching the psychodrama of the baby boom generation — a tale rooted in old grudges and revenge plots hatched on a handful of college campuses long ago — played out on the national stage. The victories that the sixties generation brought about–the admission of minorities and women into full citizenship, the strengthening of individual liberties and the healthy willingness to question authority — have made America a far better place for all its citizens. But what has been lost in the process, and has yet to be replaced, are those shared assumptions — that quality of trust and fellow feeling-that bring us together as Americans.

Barack Obama, The Audacity of Hope 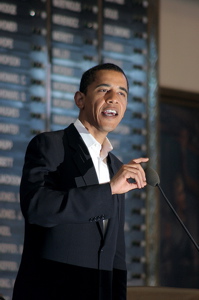 While most of the talk surrounding Obama these days is about his candidacy as a black man, we’ve decided to focus on another aspect of his demographic: Obama as a post-boomer presidential hopeful.

A boomer is typically defined as someone who was born after WWII, and who came of age in the sixties, and who was forced into having to take a side — they were either for the Vietnam war or against it. For Obama, coming of age during the Reagan era was a time of optimism — not division. By then blacks, women and gays had progressed toward equality; the iron curtain had come clanging down, and the Berlin wall was in smithereens. It was morning in America, a far cry from the boomers’ eve of destruction.

Obama’s post-boomer status could become his cardinal trait as he uses it to distinguish himself from his running mates — particularly Empress Boomer Hillary Clinton. All you need to do is replay the elections of boomers past to be reminded that the debating, the stumping, and the campaigning were inevitably stuck in the foxholes of Vietnam and the fraternities of Ivy League campuses. Obama, too young to have dodged the draft, fresh enough that drugs don’t seem to be an issue, is exempt from the accusations that have forever dogged Clinton, Bush, Gore and Kerry.

During this hour we’ll ask the question: how will Obama’s post-boomer status play out on the campaign trail? Will he be able to sustain his cool while other candidates self-immolate? How does a boomer’s approach to politics differ from that of a post-boomer or even a pre-boomer, such as John McCain? What would it mean for the political landscape to have a post-boomer occupy the Oval Office?

What’s your generation? How do your values and approach to politics differ from that of your parents? Or your children? Do you see the boomer presidencies of Bill Clinton and George Bush as distinctly divisive and polarizing? Or do you think harping on generational divides is a way of over-simplifying politics and human behavior? What are your dreams for the next administration?

Steve Benen, Obama formally kicks off presidential campaign, The Carpetbagger Report, February 10, 2007: “The point couldn’t have been more clear this morning — Obama used the word “generation,” by my count, 12 times in his announcement speech.”

John M. Broder, Candidate Next: Shushing the Baby Boomers, The New York Times [Select], January 21, 2007: “Mr. Obama would be foolish to run solely as the anti-boomer, Mr. Lehane said, if for no other reason than that the baby boomers are the largest generation in American history, and they vote.”

Jane Genova, Barack Obama: Exploiting Baby Boomer Memories to Sideline Baby Boomers, Speechwriter-Ghostwriter, February 12, 2007: “As Barack Obama announced his candidacy for president in Springfield, Illinois, of course a chill went down my spine. I am a baby boomer. Every nuance of the Obama performance awakened memories of my youth filled with John F. Kennedy as well as the hope and promise of a new generation.”

Todd Gitlin, Boomerang, Salon, May 27, 1996: “Casting campaigns as generation wars is always a bit of an intellectual fraud. As screenwriter and essayist Jeremy Larner (‘The Candidate’) says, ‘The concept of generation is a bad and false idea that comes up in every generation.'”

Edward McClellan, How Obama learned to be a natural, Salon, February 12, 2007: “As a black candidate, he’d been too inhibited, too embarrassed, to force out phrases like “our community.” …Obama wasn’t born to be a voice of black empowerment, like Rush or Jesse Jackson. It’s not just a racial thing. It’s generational, too. Confrontational ’60s-style politics are not his bag.”

BransonSavings, The “Baby Boomer” Test: “Scoring 24 to 35 correct answers means that Branson Missouri is your kind of town full of your kind of fun because yes, you too are a ‘Baby Boomer’!”

It may sound like something new, but in a way [Obama] is maybe trying to go back to something old. If you look at Washington politics, up until the baby boomer generation became the majority in Congress — and in most of the positions of power in Washington — Democrats and Republicans would argue all day long on the floor of the Senate or the House, and they would go out and have drinks together and have dinner together and socialize with their families on a fairly regular basis. They did their combat by day, nine to five, and then after business was done, they all went out and were friendly and sociable, and it was a gentlemen’s game, and they don’t do that any more.

You gotta wonder: it’s almost like [Clinton] is going to be fighting the last war. That is to say, the boomer Democrats… have been fighting to prove that we are good central Americans, and so on, who have these other leftish political values. While she’s trying to fight that war, she could potentially… be outflanked.

What’s interesting is that the overall appearance [of Obama’s announcement video] is low-context. Whereas, when you look at Hillary’s, you immediately know where you are. You’re in a drawing room in Chappaqua, in a good, solid, middle-class family home. Obama appears to be coming from the edge of somewhere. Again, in his actual text, note he said nothing about who he is, no statement of “I’m a father,” or even “I’m a Christian,” or such, which I think again plays to that same notion, that he’s going more for the ideas, and moreover, he’s not coming from any obvious context of any past conflicts.

I’ve actually seen polling which suggests that on the eve of the Iraq war, younger Americans were more supportive of the war than older Americans, interestingly which I think was true for Vietnam as well. So I think it’s not fair for us — particularly those like me who mistakenly supported the war — to suggest that it was only baby boomers who thought that this was a good idea.

There is a sense, in the national debate, that America may be becoming an old power. China and India are the young, rising powers. They also happen to be non-white powers. We are the England of our day We are the aging, mature power, perhaps fading into middle age as a nation, perhaps a step slower than we once were. And I think that backdrop — that fear of national decline, national aging; we’re actually getting older as a society too, as are the Europeans — is a real backdrop to much political and cultural debate about America in a globalized world. And that may make Obama attractive, as someone to try to turn that around.