On David and Goliath

On David and Goliath

In the narrative of the story, David gets on with whatever the next project is. He doesn’t invoke victimhood or being small as something that he lives by.

Sifting through the details of a bloody six days in yesterday’s story meeting, from Haifa to Nasrallah, Katyushas to Syria, we eventually drifted far afield and found ourselves talking about bar fights (via Global Voices) and biblical stories and, specifically, the lasting power of David and Goliath.

Which is not to say that we’re not interested in the details of the current situation. We have been, and will continue to be. But this seems like as good a time as any to take a big, biblical step back away from the details of an entrenched conflict and toward the reverberations of a story that never grows old. 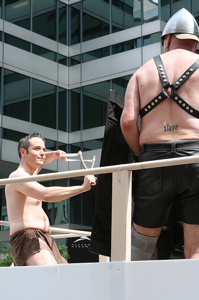 And then there’s the story itself, which is stranger and more complex than the newspaper headline (“Boy slays giant with slingshot”) would have suggested. If you haven’t just brushed up on 1 Samuel. 17, for example, you might have forgotten David’s careful self-regard:”What will be done for the man who kills this Philistine and frees Israel of the disgrace?” he asks.

Or his devotion: “Who is this uncircumcised Philistine in any case, that he should insult the armies of the living God?”

Or his swagger: “You come against me with sword and spear and scimitar,” he warns Goliath, “but I come against you in the name of the Lord of hosts, the God of the armies of Israel that you have insulted. Today the Lord shall deliver you into my hand; I will strike you down and cut off your head. This very day I will leave your corpse and the corpses of the Philistine army for the birds of the air and the beasts of the field; thus the whole land shall learn that Israel has a God.”

Or that later, in exhange for King Saul’s daughter’s hand in marriage, he slays 200 more Philistines… then brings back 100 foreskins. For some reason they didn’t emphasize that part in my Hebrew School.

We’re asking: what is it about this story that has captured our imaginations and our self-conceptions — those of so many different peoples and nations — for so long? Is it just that everyone likes an underdog? (And what kind of an underdog has God on his side? Or cuts off the head of his vanquished foe, just to prove a point?) What are its historical resonances? Its psychological dynamics? Why is it that Goliaths always want to be — or, even, think of themselves as — Davids, and Davids Goliaths?

Let’s talk folklore and mythology. Or sociology, anthropology, psychology, and psychiatry. But let’s try to stay away from Haifa and katyushas for a night.

Author of The Life of David and six books of poetry, including First Things to Hand

Thanks to Jenny Attiyeh for the suggestion.

Author, War Is a Force That Gives Us Meaning

Chairman, The Rado Advanced Psychoanalytic Study Group on Pyschoanalytic Perspectives on the Bible

Follower of Basho, They Call it “The David Syndrome”, The Blue Rider Blog: Art Talk, April 2, 2006

The Middle East is Not a Morality Play

Paul Mirengoff, a lawyer in DC with Akin, Gump, Strauss, Hauer & Feld, writes for the blog Power Line. You heard him on The Encyclopedia of American Conservatism and...