"I'm worried that they're going to get another Versailles Treaty."

On Sunday, 62% of Greek votes, encouraged by their radical-left prime minister, Alexis Tsipras and his Syriza party, registered a desperation “no” vote to a swap of further fiscal tightening at home for debt relief from its European creditors. The night of the vote ended in celebrations in Athens’ central Syntagma Square.

But just before showtime on Thursday night, the story shifted with a jolt: after much posturing, Tsipras and the Greek delegation capitulated to many of their creditors’ demands in hopes of staying in the Euro. Syriza’s turn from defiance to compliance may leave the millions of “no” voters — part of what our guest Richard Parker calls a global “neglectorate” — feeling more discouraged than ever before. But it remains to be seen how the Greece situation will shake out.

Mark Blyth wasn’t so convinced that what looked like a final surrender of the radical left in Greece was anything more than one more kick of the can down the road of untenable austerity economics in Europe — one headed for a ‘breakdown’:

I think I recall looking at the BBC website yesterday and happening upon a link that said, “June 23: Greeks at final last stop.” And here we are again. So a proposal has been submitted, which seems to be a bit of capitulation, but it hasn’t been accepted yet. And there has to be the other side of that trade: are they going to get anything back? Because if not, we’re simply doing a rerun of where we were before we had the referendum. And if that’s the case, then there’s going to be a breakdown. We’ve had a situation where the European Central Bank has been squeezing the Greek banks to make sure that by Friday, everyone’s sufficiently freaked out to have them sign whatever they want. But that’s exactly the type of tactics that backfired and brought 61% of people out to vote no. So I’m far from convinced that we’re at the end of the road…

It’s very similar to the Scottish independence referendum. Let me tell you why. If you break this down, the really dramatic thing is the way the different age groups voted. So I saw a poll for Greece, 12 hours before they actually took the vote. 71% of people under 35 were going to vote no. So all the older people are gonna vote yes. The exact same thing happened when they took the Scottish referendum — why? If you’re old, and you’ve got a lot of assets, you don’t want uncertainty over those assets. You don’t want your nice Euro-denominated house to suddenly be new drachmas. If, however, you’ve been through hell and back over the past five years — you’re asset-negative, you’re up to your eyes in debt, and you’re unemployed — asset uncertainty is somebody else’s problem. I’m going to vote no. You have this generational split on top of lots of different asset splits, and that’s the way this worked out.

We do know that those young Greeks are the ones want out of an economic dive as long and painful as our Great Depression. Watch the six-year change in unemployment: in America, 1929 to 1934, versus Greece, 2009 – 2015. In March 1933, four years into the Depression, Franklin Roosevelt signed the first unemployment relief legislation through “useful public work.” No such luck in Greece: in the poorest Athenian neighborhoods, joblessness has topped 60% this year, and last year at least 1 in 10 Greek children was suffering food insecurity. Hundreds of thousands of well-educated Greeks have left the country, and the future seems to hold only more misery.

Our guest Mark Blyth declared in January that we’re watching the all-but-Homeric battle of austerity and democracy on the southern edge of the Eurozone, where deep budget cuts have become the only possible solution to economic shock. Blyth and our guest, the translator and Europe-watcher Arthur Goldhammer, are concerned about the blowback of EU overreach — not on the left but on the right:

For those who fear Syriza and its left-wing counterparts, it is worth looking at the alternatives on the radical right. From Britain to Hungary, political parties—whose ideology spans the spectrum from the explicitly Nazi (the Golden Dawn in Greece) to the nationalist–populist (the United Kingdom Independence Party and the French National Front)—are busy working to channel public anger in a different direction. Harkening back to Europe’s darkest days, they translate negotiable conflicts over economic policy into non-negotiable conflicts over ethnic identity. They attack European integration even more than the left-wing parties, question the democratic rights of existing citizens, and fan the flames of xenophobia toward ethnic minorities and immigrants. If Europe’s ruling elites want to save the European project, and the Euro at the heart of it, they need to start actively engaging with democratic left-wing parties such as Syriza and Podemos rather than shunning them. If they don’t, they will drive some of these parties into volatile left–right alliances, or, if they fail in their mandates, leave the stage open to political forces whose goals will be far more radical than mere debt restructuring and opposition to austerity.

And Richard Parker— a sage of politics at home and abroad, who once advised George Papandreou and his PASOK party — offers a diagnosis of global democracy: big, bruising institutions, public and private, have created an international “neglectorate” that’s mad as hell and in resistance. Parker hears that voice in on the left and the right, in the Greek no! and the Irish yes! to same-sex marriage, and in the rise of political outsiders sounding the alarm here in America — from Bernie Sanders and Elizabeth Warren to Ted Cruz and Rand Paul.

The last piece of tape we have to Ingrid Rowland, an American art historian based in Rome and a prolific contributor to The New York Review of Books. She told us of a striking performance of Aeschylus’ early drama, The Suppliants, in the ancient Greek theater at Syracuse in Sicily. It seemed to speak to every corner of the European questions at issue: migration, debt, welcome and power. Here’s a trailer for that play:

Tell us: what do you make of the Greek decision to vote “no”? Were you surprised at the decision to sign on to the austerity package after all? what’s up ahead for embattled Europe? Do you feel neglected, and what referendum would you have us all vote yes/no on: bank bailouts, fossil fuels, drones, etc.?

Guest List
Mark Blyth
Brown University economist, historian, and author of Austerity: The History of a Dangerous Idea.
Richard Parker
founder of Mother Jones, economist, and lecturer in public policy at Harvard's Kennedy School of Government.
Arthur Goldhammer
translator of Thomas Piketty's Capital and dozens of French books and watcher of European politics.
Reading List
A pain in the Athens: why Greece isn't to blame for the crisis
Mark Blyth, Foreign Affairs
Our guest Mark Blyth makes the case that what looked like aid to Greece was mostly a bailout for German and French banks — hence the moral rhetoric against Greece is a kind of coverup:

The roots of the crisis lie far away from Greece; they lie in the architecture of European banking. When the euro came into existence in 1999, not only did the Greeks get to borrow like the Germans, everyone’s banks got to borrow and lend in what was effectively a cheap foreign currency. And with super-low rates, countries clamoring to get into the euro, and a continent-wide credit boom underway, it made sense for national banks to expand private lending as far as the euro could reach.

The old continent creaks
Art Goldhammer, Democracy Journal
Goldhammer uses his area of expertise, France, as an exemplary European case — it's a slightly moribund and petty period in continental history, and the welfare-state model seems to be coming to an end in disappointment and disenfranchisement. Hence the rise of Marine le Pen on the French far right:

Le Pen’s jaw-jutting anti-EU pronunciamentos tap into anxieties widely shared across the French political spectrum. She claims simply to be saying out loud what many politicians in the mainstream quietly believe but do not dare to express openly: that France has forfeited too much of its sovereignty to a transnational entity it thought it could control, only to discover that it is no match, as she sees it, for the combined power of Germany, financial markets, and Anglo-Saxon economic ideology.

The economic consequences of austerity
Amartya Sen, The New Statesman
Sen begins his story as Keynes leaves the Versailles peace conference, knowing that he can do no good while Europe intends to punish Germany. He sees the same wrongheaded spirit in the coupling of necessary reforms and punitive austerity in today's Eurozone:

There was an odd confusion in policy thinking between the real need for institutional reform in Europe and the imagined need for austerity – two quite different things. There can be little doubt that Europe has needed, for quite some time, many serious institutional reforms – from the avoidance of tax evasion and the fixing of more reasonable retiring ages to sensible working hours and the elimination of institutional rigidities, including those in the labour markets. But the real (and strong) case for institutional reform has to be distinguished from an imagined case for indiscriminate austerity, which does not do anything to change a ­system while hugely inflicting pain. Through the bundling of the two together as a kind of chemical compound, it became very difficult to advocate reform without simultaneously cutting public expenditure all around. And this did not serve the cause of reform at all.

11 things about the Greek crisis you need to know
Matt Yglesias, Vox
Another attempt at explainer journalism in a complicated situation — Yglesias made a video arguing that Greece was, in effect, the vegetarian at a carnivorous dinner: suffering from the high valie of the Euro and the inflexibility of the Eurozone's economic arrangements:

Massachusetts has been richer than Kentucky for as long as Kentucky has existed and that shows no sign of changing. California, too, is richer than Idaho. Since the United States of America has a system of taxes and spending that transfers money from rich people to poor people, it also transfers money from rich states to poor states. We could record this history of transfers as a large debt that Kentucky owes to Massachusetts that someday needs to be repaid. But we don't. And the government of Massachusetts doesn’t waste its time lecturing the government of Kentucky about the need for Massachusetts-style structural reforms to revive its dysfunctional economy. 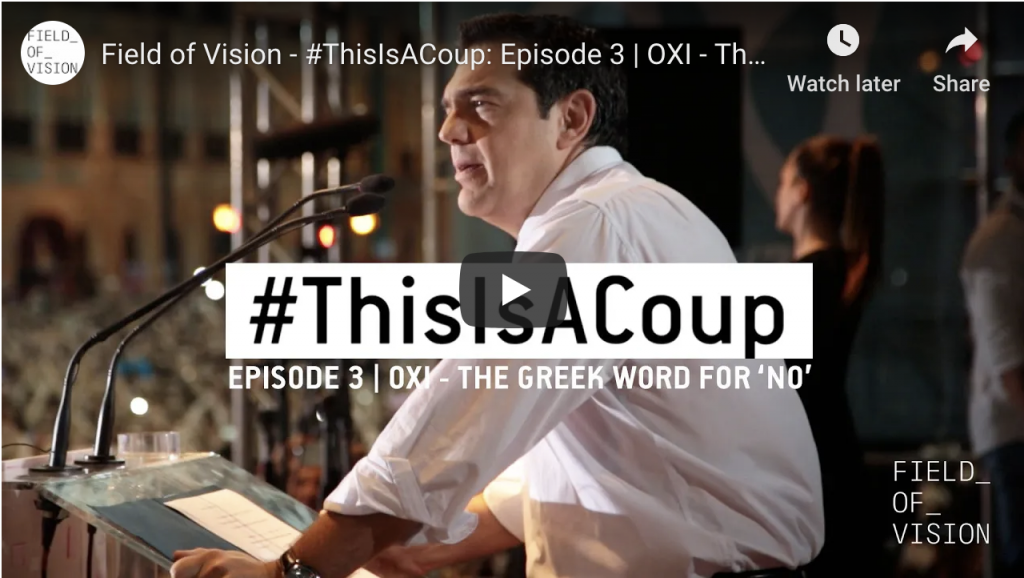 Before Brexit, of course, there was Grexit: the possibility, one year ago, that Greeks defying the will of E.U. bureaucrats bankers would fall right out of Europe. Yanis Varoufakis was the finance minister of...

9 thoughts on “Oxi Means… “Maybe”: The Vote in Greece”