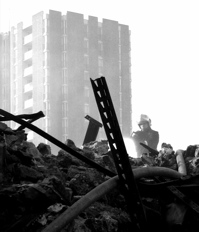 The remains of a carpet factory in Paris [Matthew Kebbekus / Flickr]

What was most striking … was the condition of the neighborhoods. Listening to the news, I imagined inner-city like ghettos, rotting public housing and street gangs. The places we saw appeared middle class, with decent parks, clean streets, and a mixture of businesses and residential towers. I expected it to be more stark.

Matthew Kebbekus, from a 11/08 email to Open Source

Now one thing to note is that these neighboroods are not ghettos. My aunt lived there most of her life, she was a teacher in a nearby pre-school and has a mostly normal middle class life. There are lots of minorities, lots of kids with dysfunctional families, an obvious lack of jobs, and decrepit buildings, but it’s not a rundown place, it’s not cut off from the rest of the country, and there is a lot of solidarity between the inhabitants.

Jerome a Paris, from the European Tribune

So what’s going on? The riots in France, Denmark — and now possibly Belgium — don’t resemble the civil unrest we profess to understand from our own recent history. We read words like “disenfranchisement,” and they don’t really tell us anything and it’s hard for us, as Americans, to understand that France — and most of Europe — is not really an immigrant nation. Or at least, it doesn’t see itself as one. Or, at least, not until recently.

What drives this kind of unrest? Is it an consequence of immmigration policy, or social policy? Or is it, a roaring to power of the significant numbers of North African and Middle Eastern immigrants that live in capitals and port cities all over Europe? Is this civil unrest, or a new political class?

Author, The European Dream: How Europe’s Vision of the Future is Quiety Eclipsing the American Dream

Global Voices Online, Dead for Nothing in Paris

The Telegraph, a map of the riots

City Journal, The Barbarians at the Gates of Paris and The Suicide Bombers Among Us (via LeeJudt)

Economics and similar, for the sleep-deprived, Les Riotes (or possibly “les riots”, I really can’t be bothered to check) (via Abby)

Click to Listen to the Show (24 MB MP3) Paris Mosque [hometownzero / Flickr] Our show on the French rioters — young disenfranchised Arab and African Muslims enraged by their socioeconomic reality...